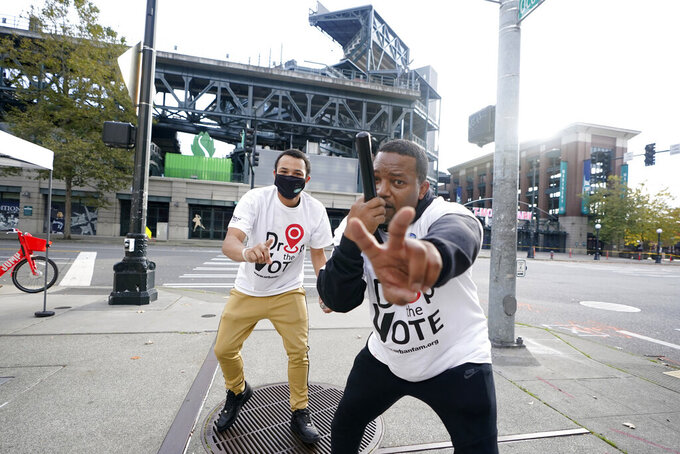 Dwayne Alexander, right, and Dequan Stowe, left, perform hip-hop music with the theme of "Drop The Vote," Monday, Nov. 2, 2020, outside a voting center in Seattle where people can drop off ballots or get help registering to vote or obtaining their ballots. Both are with the Seattle-based organization Urban Family, who came up with the Drop The Vote campaign to encourage and educate voters from underserved communities. (AP Photo/Ted S. Warren)

Gov. Jay Inslee's attempt to win a third term and an effort to repeal a statewide sex-education requirement for public school students top Washington state's general election ballot. Here is a summary of major races on the ballot.

There are several high-profile races among Washington's 10 U.S. House contests.

In the 10th District, which includes the south Puget Sound, the next representative district will be a Democratic woman. Former Tacoma Mayor Marilyn Strickland would be the first Black member of the state’s congressional delegation, and the first Korean American woman elected to Congress in the country.

State Rep. Beth Doglio, who identifies as bisexual, would be the first LGTBQ member of the Washington delegation. Strickland and Doglio emerged from the state’s top-two primary in August, which drew 19 candidates after Democratic U.S. Rep. Denny Heck announced late last year that he would retire at the end of his current two-year term.

In the 8th District, which stretches from Seattle's far eastern suburbs into central Washington, Democrats are trying to hold on to a seat they just picked up for the first time in 2018. After an expensive, close 2018 campaign, Kim Schrier, a pediatrician, became the first Democrat to represent the district since it was created in the early 1980s. She is facing Republican Jesse Jensen, an Army veteran and former program manager at Amazon and Microsoft.

In Washington's 3rd district, which encompasses the southwest portion of the state, incumbent Republican Rep. Jaime Herrera Beutler is in a rematch with the Democratic opponent she beat in 2018 — Carolyn Long, a Washington State University-Vancouver professor in the school of politics. Beutler is seeking her sixth term.

Referendum 90 could overturn a sex education requirement for Washington public schools. In March the state Legislature passed a bill outlining mandatory sex ed standards they said were necessary to protect young people from sexual abuse, diseases and infections. Some Republicans and religious conservatives took issue with the content of the standards, and pushed for R-90 as a way to take back local control. The referendum marks the first time in the country that such a decision on sex ed will be decided by voters.

Two Democrats, state Sen. Marko Liias, 39, the majority floor leader in the Senate, and retiring U.S. Rep. Denny Heck, 68, whose career in politics and public service has spanned more than four decades, are vying for the position. The lieutenant governor serves as president of the state Senate, participates on several committees and is next in line should the governor leave office.