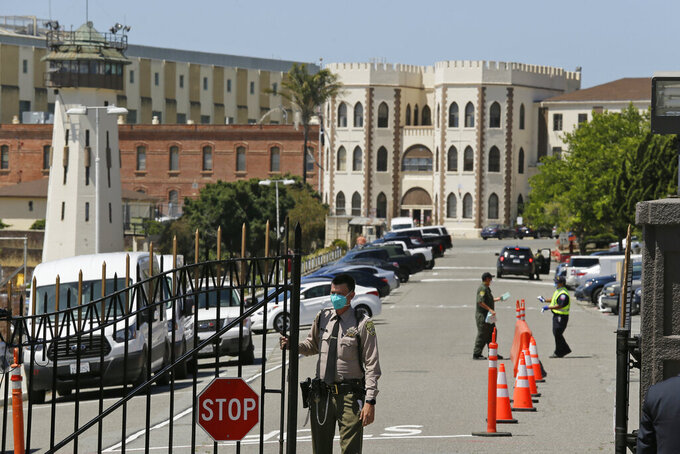 FILE - In this July 9, 2020, file photo, a correctional officer closes the main gate at San Quentin State Prison in San Quentin, Calif. California prison officials did a poor job requiring inmates and staff to wear masks to slow the spread of the coronavirus, and even "perplexingly loosened" their policy just as cases were spiking, the state's inspector general said Monday, Oct. 26, 2020. (AP Photo/Eric Risberg, File)

SACRAMENTO, Calif. (AP) — California prison officials did a poor job requiring inmates and staff to wear masks to slow the spread of the coronavirus, and even “perplexingly loosened” their policy just as cases were spiking, the state's inspector general said Monday.

More than 15,500 inmates have been infected, and 76 died as outbreaks ballooned in several of the state's prisons, including San Quentin north of San Francisco, home to the state's death row. More than 4,200 employees were sickened and 10 have died statewide.

Yet there was “frequent noncompliance” by both inmates and staff with department mandates for wearing masks and maintaining a safe distance from one another, Inspector General Roy Wesley said in the report.

It blames lax enforcement by supervisors and managers for “increasing the risk of additional, preventable infections.”

Just seven of the corrections department's more than 63,000 employees were referred for formal investigations or punishment for misconduct for ignoring face covering or physical distancing requirements.

It allowed those who work alone in an office or a guard tower to remove their masks, unless someone else enters that space. Employees also are not required to wear a mask if they are outside and can stay physically distanced from others.

The inspector general said those “relaxed requirements appeared to unnecessarily increase the risk” given that the virus can be spread even when people stay 6 feet (1.8 meters) apart, the increased difficulty in enforcing the new standard, and the "volatile nature of a prison environment."

The department had plenty of masks, unlike many institutions in the early stages of the pandemic, inspectors found.

Despite nationwide shortages, the department was generally able to get personal protective equipment. It included more than 752,000 cloth face coverings made by the California Prison Industry Authority, half of which were distributed to inmates and employees by April 9, the inspectors found.

Simas said corrections officials in all distributed millions of pieces of protective equipment so inmates and employees could comply with the mask mandate.

Corrections Secretary Kathleen Allison, in a response to the report, said the department “will continue its effort to consistently enforce those policies and procedures.”

Monday's report is the second sought by state Assembly Speaker Anthony Rendon, who did not comment on the results. The inspector general reported in August that prisons were inconsistent in screening employees and visitors for the coronavirus, which may have increased the risk of its spread.