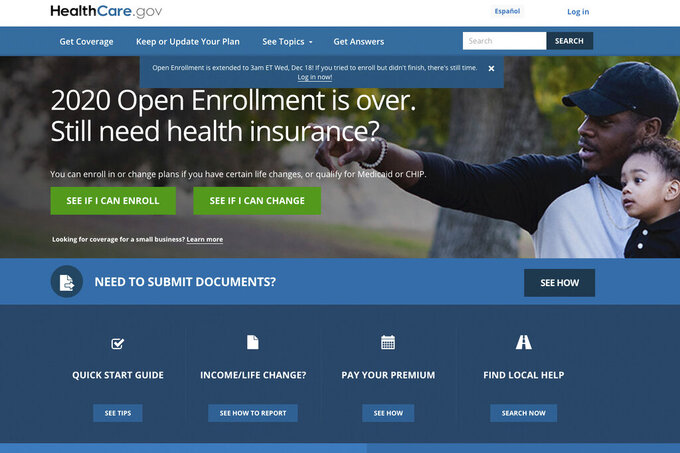 FILE - This screen grab from the website HealthCare.gov shows the extended deadline for signing up for health care coverage for 2020. (Centers for Medicare and Medicaid Services via AP, File)

More than a million people could swamp the Affordable Care Act’s health insurance marketplaces in the coming months as employers lay off staff during the coronavirus pandemic.

The health insurance markets are a backbone of the Obama-era law that President Donald Trump has tried to demolish. They are now seen as a key option to help protect people from devastating medical bills while they search for another job and new coverage.

Nearly 10 million Americans applied for unemployment benefits in the final two weeks of March, far exceeding the figure for any corresponding period on record.

Here’s a closer look at the issue.

WHAT’S THE RISK OF REMAINING UNINSURED?

People would not have an insurer’s leverage to knock down the price of routine care like a doctor visit, but the real financial peril comes from expensive care like emergency room visits and hospital stays.

Researchers say a hospital stay of several days could cost well over $20,000 depending on factors like where the patient lives and how much time is spent in an intensive care unit.

“Now’s not the time to roll the dice (without insurance) and hope you don’t get sick,” said Peter Lee, executive director of California’s state-based health insurance exchange.

WHAT PROTECTION CAN YOU GET?

Insurers will typically pick up most of the bill for a hospital stay as long as the care takes place in their coverage network.

Several major insurers have recently announced that they also will waive patient out-of-pocket expenses like copayments or deductibles through the end of May or June for coronavirus-related care.

That includes hospital stays, which can stick patients with a deductible of several thousand dollars, depending on coverage. Since insurance is complicated, patients should call the 800 number on the back of their card to clarify that coverage.

WHAT IS THE FEDERAL GOVERNMENT DOING?

The White House said Friday it would reimburse hospitals that treat uninsured patients for COVID-19. Last week’s massive rescue package set aside $100 billion in funding for hospitals to handle uncompensated care and other coronavirus-related losses.

“This should alleviate any concern uninsured Americans may have about seeking the coronavirus treatment,” Trump said Friday.

Health and Human Services Secretary Alex Azar said part of the $100 billion total would be used for those reimbursements. Providers will be paid at Medicare rates and would be barred from billing patients for anything above those rates.

WHO CAN SHOP ON THE INSURANCE MARKETPLACES?

HealthCare.gov and state-run insurance markets normally limit enrollment to a regular sign-up window that starts each fall. But losing your health insurance triggers an opening that allows you to shop for a new plan.

In addition to that, several states have started so-called “special enrollment periods” for people who didn’t sign up during the regular window but now want protection in case the coronavirus hits. Those states include Massachusetts, New York and Nevada.

Governors and some advocacy groups are calling on the Trump administration to open a similar window for more Americans. But the administration has sent mixed messages on whether it will do so.

Consumers may qualify for income-based tax credits to help pay for the coverage.

“It’s an important option to try and connect people who are uninsured to some form of coverage during this public health crisis,” said Jennifer Tolbert, state health reform director at the non-profit Kaiser Family Foundation.

More than 11 million people are covered through the health law’s insurance markets, which offer subsidized private policies to people who don’t have coverage on their jobs.

The consulting firm Health Management Associates estimates that the individual market could increase by 365,000 to 2.1 million people due to the coronavirus pandemic. That depends on how high unemployment rates climb.

Health Management Associates also predicts that the uninsured population could climb from around 29 million people to as much as 40 million with high unemployment.

ARE THERE OTHER OPTIONS?

Some people who have lost jobs might be able to switch to a spouse’s employer-based coverage. Others may see their income levels fall far enough to qualify for a state’s Medicaid program.

Employers also may help. The benefits consultant Mercer found through recent online polling that some companies are providing subsidies to help their laid-off workers keep their coverage for a period of time.

Mercer also found that many companies that put employees on a temporary furlough will continue to provide benefits, although some may commit to doing so for only a couple weeks.

That will vary depending on things like the industry and the financial hit the employer expect to take from the downturn, said Beth Umland, Mercer’s director of research for health and benefits.