Interest is lively at deadline for 'Obamacare' sign-ups 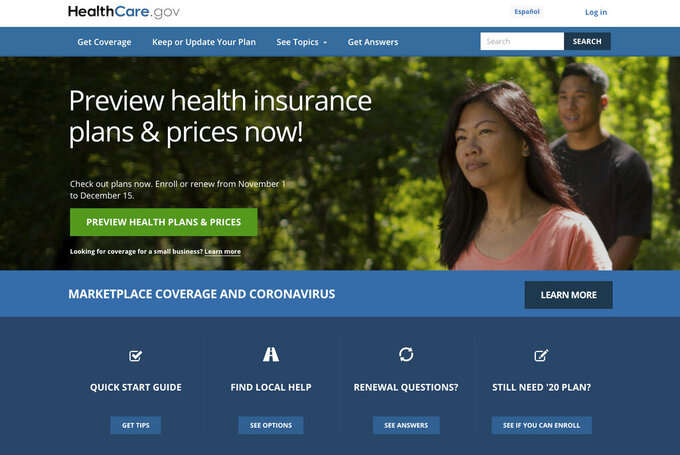 FILE - This file image provided by U.S. Centers for Medicare & Medicaid Service shows the website for HealthCare.gov. As COVID-19 spreads uncontrolled in many places, a coalition of states, health care groups and activists is striving to drum up “Obamacare” sign-ups among a growing number of Americans uninsured in perilous times. (U.S. Centers for Medicare & Medicaid Service via AP)

WASHINGTON (AP) — A crush of sign-ups expected Tuesday on the last day of open enrollment for HealthCare.gov could help solidify the standing of “Obamacare” as an improbable survivor in the Donald Trump years.

In 36 states that use HealthCare.gov,- Dec. 15 is deadline day for coverage that starts Jan. 1, while another 14 states and Washington, D.C., have later dates. Analysts and advocates who follow the annual insurance sign-ups say interest has gotten stronger with the coronavirus pandemic gripping the nation.

Also, the legal cloud hanging over the Affordable Care Act seemed to start lifting last month when Supreme Court justices gave a skeptical reception to the latest challenge from the Trump administration and conservative-led states seeking to overturn the law in its entirety.

“The safety net is working,” said Chris Sloan of the consulting firm Avalere Health. When final numbers are released next year, Sloan says the ACA could surpass its current enrollment of 11.4 million people. “I think it's just reflective of the need being greater for people who have lost their jobs and need to find some other form of health insurance,” he said.

Stephanie Burton, a solo practitioner lawyer from Kansas City, Missouri, said she recently renewed her coverage for 2021. For about $150 a month, after subsidies, Burton is also able to cover two young adult children as they negotiate their transition to self-sufficiency in a shaky economy.

But Burton said she's noticed that the annual enrollment season gets very little promotion. After Trump failed to repeal former President Barack Obama's signature law, not even the rising need for coverage amid coronavirus layoffs has persuaded his administration to rethink its opposition. Trump administration officials say what they have done is to focus on the smooth operation of the HealthCare.gov website for those who may want the coverage.

“Since I've always had it, I get reminders by email,” said Burton, but “there are a lot of people who may not even know how to find this information.”

That's expected to change under the incoming Biden administration, which plans to build on the health law to expand coverage to more than 30 million who still lack it.

Some former Obama officials who closely monitor the Trump administration's operation of the program say they have reason to hope in this sign-up season.

Joshua Peck, who used to be chief marketing officer for Obamacare, says traffic is clearly up from current customers actively renewing their coverage, and the number of new consumers is tracking with previous years. Active renewals are seen an indicator that people are eager to keep their plans from lapsing. Those who take no action are automatically renewed, but they have to follow through to retain coverage by paying their premiums.

“It gives us reason to think that the end of this open enrollment period could be a strong one,” said Peck. “We're cautiously optimistic.”

But Tuesday could get anxious for procrastinators because deadline day usually brings long waits for personal assistance via the call center and the website may run slow. Typically people who start the enrollment process before the end of deadline day are given a chance to complete it.

Of some 28 million uninsured Americans before the pandemic, the nonpartisan Kaiser Family Foundation estimates more than 16 million were eligible for some form of subsidized coverage through the health law.