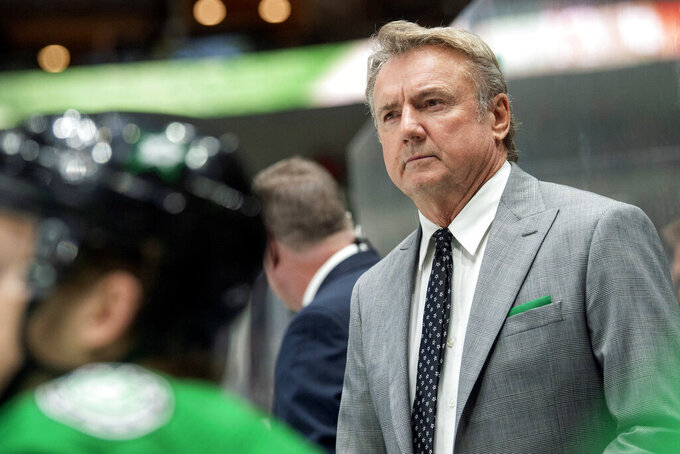 FILE- In this Dec. 10, 2019, file photo, Dallas Stars interim head coach Rick Bowness watches play from behind the bench during the third period of an NHL hockey game against the New Jersey Devils in Dallas. The Stars, on Thursday, Oct. 29, 2020, have officially removed the interim tag from Bowness, the coach who led them to the Stanley Cup Final. (AP Photo/Jeffrey McWhorter, File)

There was a point while serving as interim coach of the Dallas Stars when Rick Bowness knew he didn't want someone else to come in and take over the team. And that was even before they went to the Stanley Cup Final.

The Stars are still Bowness' team.

Dallas officially removed the interim tag Thursday and gave the 65-year-old Bowness a two-year contract, making him the franchise's 24th head coach, and ninth since moving to Dallas in 1993. The move came a month after the season ended, with no certainty about when the next one will begin amid the pandemic.

“From January, I really started to enjoy it a lot more. And the thrill of the playoffs, it takes everyone to another level,” Bowness said. “Once the playoffs started, there was no doubt in my mind that I wanted to keep keep doing this.”

General manager Jim Nill said he remembers calling Bowness into his office in December, telling him what was happening and asking if he wanted to be the interim head coach. They agreed then to get through the season before determining the coach's role after that.

Bowness was 20-13-5 after becoming their interim head coach. He was in his second season as a Stars assistant for Jim Montgomery, who was fired and later went to alcohol rehabilitation.

“The first thing he said is ’I’ve got this.' And he did have it. Right from day one, he grabbed the team,” Nill said. “That tells you that a coach is doing the right things, that they respect the coach, the coach respects them and he gets the most out of them.”

Stars captain Jamie Benn responded to the news with a single-emoji tweet — a grinning face and smiling eyes.

The Stars made it to their first Stanley Cup Final since 2000, in a season that was put on hold for 4 1/2 months because of the coronavirus and ended with two months inside the NHL bubble in Edmonton. They won the Western Conference before falling to Tampa Bay in six games.

“We’ve got a little bit of unfinished business, we were two games short. And that’s something Rick and I talked about,” Nill said. “That is what burns inside of us, is to win that Stanley Cup. And Rick knows that we have a team that we can do that. And he knows that he wants to be the one that’s going to guide this team the rest of the way. And I’m very confident he is the one.”

The only NHL coaches other than Bowness to be an NHL head coach in parts of five different decades are Hall of Fame members Pat Quinn and Scotty Bowman.

The Stars made it to the Stanley Cup final even while dealing with a plethora of significant injuries.

All-Star forward Tyler Seguin had a torn labrum in his hip that likely will force him to miss the start of next season, especially since he hasn't yet had the surgery that will require about four months of recovery. Benn and goaltender Ben Bishop had surgery during the season.

Bishop was a non-factor in the playoffs after never fully recovering from knee surgery in May. Benn played in all 27 playoff games, but was still affected at times from shoulder surgery he had right before the season was paused in mid-March.

Anton Khudobin, the 34-year-old journeyman goalie who took over for Bishop, had surgery right after the playoffs to address a nerve issue that was causing numbness in his stick hand. He then signed a $10 million, three-year deal in free agency to stay with the Stars.

Bowness said he looks back on the season and playoff run with a lot of pride.

“We all wish we had been a healthier team going into that Final. That would have been a lot more interesting if we had been a healthy team,” Bowness said. "Watching what they were willing to do, to go through, to get on the ice and play made me very proud of this group. And it shows their commitment to winning and doing anything they could to win the Stanley Cup."