Internet gambling still strong in NJ even with casinos open 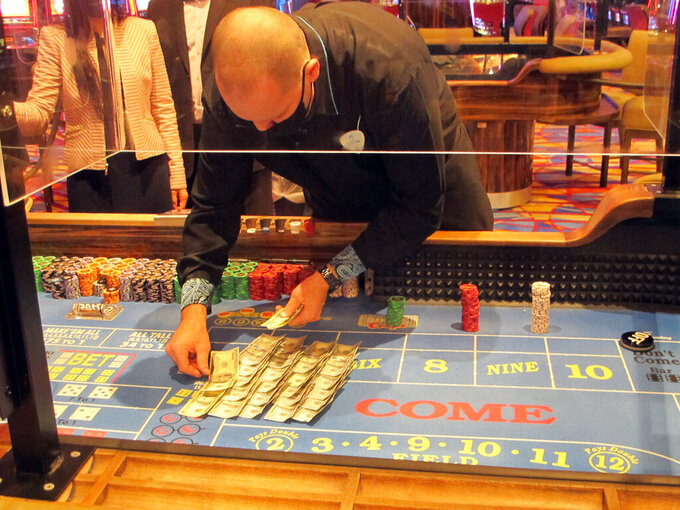 A dealer counts money at a craps table at the Hard Rock casino in Atlantic City , N.J., on May 3, 2021. Figures released May 14, 2021, show Atlantic City's casinos won nearly four times as much from gamblers in April as they did a year ago, when the casinos were closed, and online betting was the only game in town. (AP Photo/Wayne Parry) 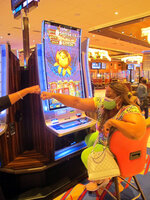 Figures released Friday by the New Jersey Division of Gaming Enforcement show the casinos took in nearly $108 million from internet gambling in April. That's up nearly 35% from April 2020, when all the casinos were closed due to the COVID-19 pandemic, and online betting was the only game in town.

Internet gambling, and to a lesser extent, sports betting, helped keep Atlantic City's nine casinos afloat during the 3 1/2 months they had to shut down last year due to the virus outbreak.

Jane Bokunewicz, coordinator of the Lloyd D. Levenson Institute of Gaming, Hospitality and Tourism at Stockton University, noted that April's internet gambling revenue was down slightly from the previous month, and in-person gambling was up slightly over that same period.

“This could be an early indication of a balance shift back to in-person gaming,” she said. “While operators will no longer need to rely solely on internet gaming revenue, it is poised to remain a significant share of the casino gaming revenue mix."

Overall gambling revenue nearly quadrupled in April compared to a year ago, when the casinos were closed. The casinos and three horse tracks took in $352.2 million in April, up from $82.5 million last April. Those figures do not include horse racing revenue, but three tracks also accept sports bets, which are included in the totals calculated by the state.

The casinos won nearly $190 million from in-person gamblers in April, compared with nothing a year earlier.

The casinos and tracks took nearly $748 million worth of sports bets in April , and kept nearly $55 million of that total as revenue.

The market-leading Borgata won more than $78 million from gamblers in April — and would have done even better had it not undergone a slot machine technology change during the month that forced a pause in some gambling operations and promotions. The slot floor is fully operational again, the casino said.

Hard Rock's in-person gambling revenue increased by more than 50% compared to April 2019, a performance that casino president Joe Lupo said was nearly twice as much as its nearest competitor.

“With COVID-19 numbers and vaccination rates headed in the right direction, we are optimistic about a safe return to normalcy this summer at the Jersey Shore,” he said.

“Restrictions are lifting, areas of business are reopening, and summer is about to begin,” added Terry Glebocki, CEO of Ocean Casino Resort, whose revenue was up nearly 2,000% from a year ago. "On the heels of a successful year, we are optimistic about the future of our casino-resort and the return of tourism to Atlantic City.”