Investigators: No sign of arson at camp for ill children 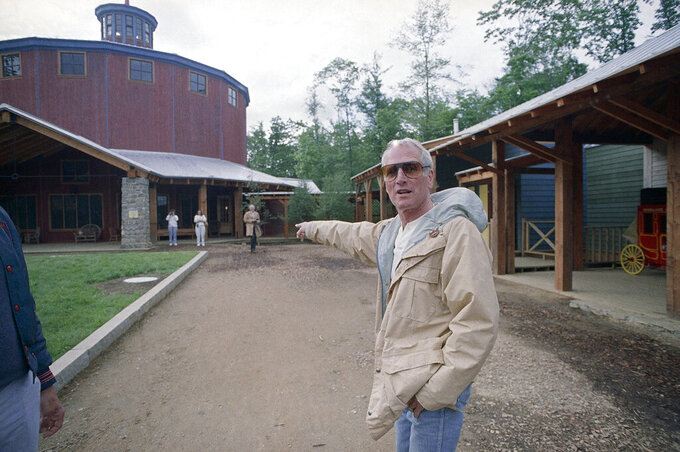 FILE - In this Thursday, June 9, 1988 file photo, Actor Paul Newman gestures as he arrives at "The Hole in the Wall" camp in Ashford, Conn. Newman is the camp founder and $7 million of profits from his "Newman's Own" Food Products, Inc. was contributed to help finance the camp. A fire on Friday evening, Feb. 12, 2021 destroyed four buildings at Paul Newman’s Hole in the Wall Gang Camp for seriously ill children in Connecticut. (AP Photo/Bob Child. File)

The fire marshal's office in Ashford said the investigation was continuing, but told the Hartford Courant that dogs had not detected any signs of an accelerant in the rubble and there were no footprints in the snow around the buildings that burned.

The camp, which had only online programming last summer because of the coronavirus pandemic, plans to reopen with a limited schedule this year, said Ryan Thompson, a spokesperson for the charity.

“I can say that we still plan to resume on-site and residential family programming at camp this spring and host eight, four-day family camps this summer," he said. “All the programming will, of course, be modified to ensure a safe experience for all amid the COVID-19 pandemic.”

An automated fire alarm alerted authorities to the blaze which broke out just before 5 p.m. on Friday. It destroyed two of the camp's buildings, including a large wood-frame structure that was made to look like the center of an old western town. Different sections of the building were constructed to look like separate buildings, housing different programs, such as arts and crafts and the camp store.

Travelers and the Travelers Championship PGA golf tournament have pledged to match up to $1 million in donations to help the camp rebuild.

The camp, with extensive medical facilities on site, was founded by Newman in 1988 in the woods of eastern Connecticut, to provide summer camping experiences adapted for children with serious physical and medical limitations. It has a Western motif inspired by the late actor’s movie “Butch Cassidy and the Sundance Kid.”

The charity also runs outreach programs for children in more than 40 hospitals, clinics and other settings in the Northeast, serving more than 20,000 children each year.

The camp is funded in part through proceeds from the sale of “Newman’s Own” brand products.