IOC VP: Chinese human rights not a concern before 2022 Games 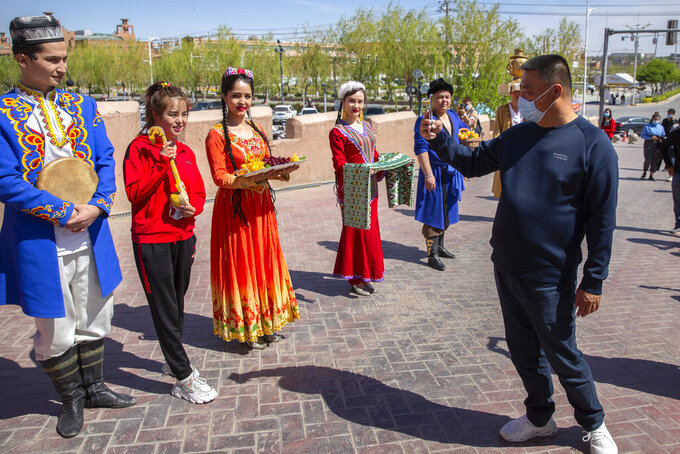 A tourist snaps pictures of Uyghur performers at the front gate of the remodeled city center of Kashgar in China's far west Xinjiang region, during the welcome ceremony of a state tour for foreign media on April 19, 2021. Four years after Beijing's brutal crackdown on largely Muslim minorities native to Xinjiang, Chinese authorities are dialing back the region's high-tech police state and stepping up tourism. But even as a sense of normality returns, fear remains, hidden but pervasive. (AP Photo/Mark Schiefelbein)

There has been widespread criticism of Beijing’s treatment of Uyghur Muslims in the northwest China region of Xinjiang, which rights groups say amounts to genocide, as well as its crackdown on protesters in Hong Kong and its policies toward Tibet and Taiwan.

Coates, who is also president of the Australian Olympic Committee, said while human rights were an important part of the fundamental principles of the Olympics the IOC had to respect the sovereignty of the host country.

“The IOC’s remit is to ensure that there is no human rights abuses in respect of the conduct of the Games within the National Olympic Committee, or within the Olympic movement,” Coates told the National Press Club in Australia's capital, Canberra, on Wednesday. “We have no ability to go into a country and tell them what to do.”

Coates said the IOC was “not a world government.”

“We have to respect the sovereignty of the countries who are hosting the Games,” Coates said. “The work the IOC is doing is to protect the Olympians and those involved in the Olympic (Games) — that’s within our remit"

The Beijing Winter Games are scheduled to run from Feb. 4-20, with the Paralympics set to follow from March 4-13. The Chinese capital hosted the Summer Olympics in 2008.