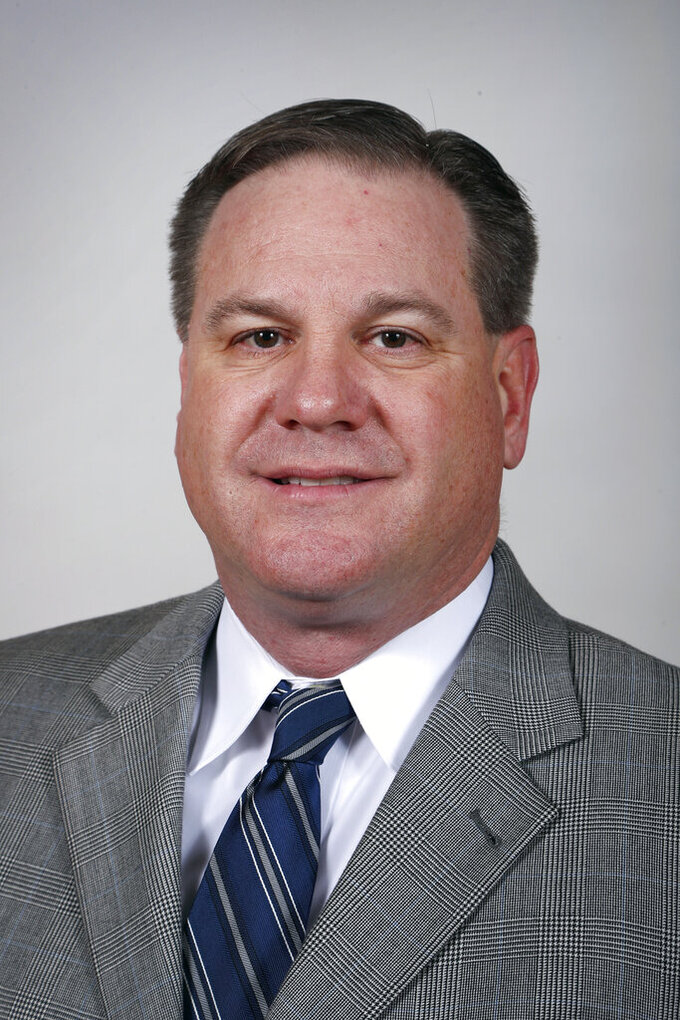 FILE - Shown in this Feb. 8, 2017, file photo, is Iowa Senate Secretary Charlie Smithson at the Statehouse in Des Moines, Iowa. Smithson threatened retribution against a GOP appointee who oversees workplace safety after inspectors said they would make public their concerns about COVID-19 risks at the Capitol. Notes show Smithson, the secretary of the Senate, criticized Iowa Labor Commissioner Rod Roberts for "not knowing better" and told inspectors at an April 2, 2021, meeting that the issue would be raised at his next conformation hearing. (AP Photo/Charlie Neibergall, File)

IOWA CITY, Iowa (AP) — The top administrator in the Republican-controlled Iowa Senate threatened retribution against a GOP appointee who oversees workplace safety after inspectors said they would make public their concerns about COVID-19 hazards at the Capitol, records show.

Charlie Smithson, the secretary of the Senate, criticized Iowa Labor Commissioner Rod Roberts for “not knowing better” and told inspectors at an April 2 meeting that senators wouldn’t forget, according to an inspector’s notes of the meeting.

“We’ll take that up at his next confirmation,” Smithson is quoted as saying in the notes, released to The Associated Press under the open records law. Notes from a second inspector at the meeting report that Smithson indicated “this might come up during Rod Roberts’ reappointment.”

Roberts is a former member of the Iowa House and 2010 GOP candidate for governor who was appointed labor commissioner by Gov. Kim Reynolds. The Senate voted to confirm him 48-0 in 2019. If reappointed when his term expires in 2023, he would need support from 34 of 50 senators to serve another six-year term.

Smithson told AP Friday that he was upset the inspectors' findings would lump the Iowa Senate and House together, and that he thought Roberts, a former lawmaker, would know they should be treated as separate constitutional bodies.

“I expressed frustration in a stupid way,” Smithson said.

Smithson said he has no influence over the confirmation process since he's not a voting member of the Senate, and that his comment didn't impact the outcome of the investigation.

The remark came as Iowa Occupational Safety and Health Administration inspectors informed him they would issue a “hazard alert letter” urging legislative leaders to strengthen their COVID-19 mitigation policies to better protect workers and visitors.

Smithson reacted with frustration, saying that “doesn’t tell me a (expletive) thing,” inspectors' notes say. In a letter hours later, Smithson thanked them for meeting and added, “I know that this has not been an easy matter to investigate and I am not necessarily an easy person to deal with when I defend a client.”

Iowa OSHA launched the inspection in January after labor unions filed a complaint alleging the Capitol was at risk of a COVID-19 outbreak because of lax safety protocols.

Charlie Wishman, president of the Iowa Federation of Labor AFL-CIO, said he was stunned that Smithson would raise the prospect of retaliation against Roberts.

“Rod Roberts is an honorable, great public servant and it’s ridiculous to me that they would threaten to hold up his confirmation just for doing his job and looking into whether or not people at the Capitol are safe,” Wishman said. His group filed the complaint that triggered the inspection.

The Iowa House and Senate's GOP leadership announced before the session began in January that they would not mandate masks, require lawmakers and employees to report COVID-19 diagnoses or conduct contact tracing to determine whether cases originated in the Capitol.

Inspectors learned that lawmakers and their staff did not have to undergo temperature checks and health screenings because they arrived through a separate entrance to other visitors. They documented the lack of masks among Republican lawmakers and aides, a failure by some to socially distance inside the building and concerns from Democratic lawmakers and employees who felt unsafe going to work, inspection files show.

Smithson, who works at the pleasure of the Senate Republican majority, initially questioned whether Iowa OSHA had the authority to regulate the legislative branch, which sets its own rules under the Iowa Constitution.

In a March letter to inspectors, Smithson argued that the Senate’s COVID-19 protocols offered “remarkable protections” and asked them not to find any violations, noting that the chamber allowed people to work remotely and held many hearings virtually.

Iowa OSHA could not take enforcement action on the COVID-19 hazards because the agency did not have standards requiring masks and the reporting of positive cases. The agency fined the General Assembly $5,219 for unrelated violations including an uncovered electrical outlet in a conference room that was a burn hazard.

By the time the document became public, the session was a month from adjournment. Republican Senate Majority Leader Jack Whitver and House Speaker Pat Grassley dismissed calls to revisit their policies, blasting the investigation as politically motivated.

Whitver, Grassley and other Republican lawmakers agreed to speak with inspectors in February but checked boxes asking OSHA to “withhold my interview from the public,” a protection designed to allow employees to speak freely about unsafe conditions without fear of retribution.

Several Democratic lawmakers agreed to allow their interviews be public, and the inspection file contains audio and written notes of those sessions. The only Republican who allowed his interview's release was state Sen. Craig Johnson of Independence, who said he didn't wear a mask because it wasn't required.

“Everybody has a choice to come here or not come here,” Johnson said of the Capitol.

Ten COVID-19 cases associated with the Iowa House and Senate were voluntarily reported during the session, but the lack of contact tracing means it's unclear how many of those infections were contracted at the Capitol.