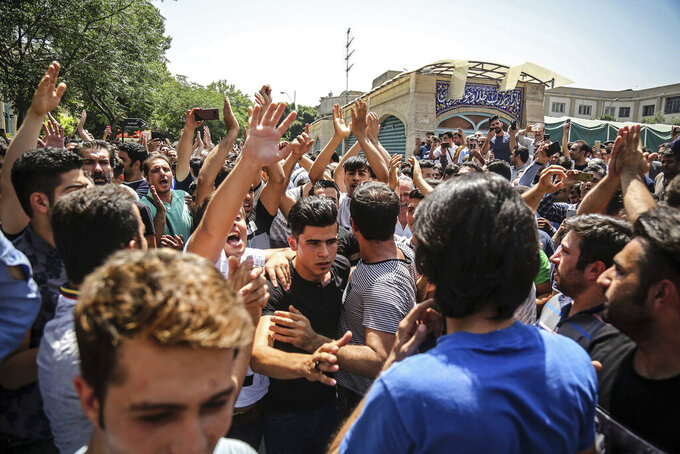 FILE - In this June 25, 2018 file photo, a group of protesters chant slogans at the main gate of the Old Grand Bazaar, in Tehran, Iran. On Saturday, Sept. 5, 2020, Iran broadcast the televised confession of a wrestler facing the death penalty after a tweet from President Donald Trump criticizing the case, a segment that resembled hundreds of other suspected coerced confessions aired over the last decade in the Islamic Republic. The case of 27-year-old Navid Afkari has drawn the attention of a social media campaign that portrays him and his brothers as victims targeted over participating in protests against Iran's Shiite theocracy in 2018. (Iranian Labor News Agency via AP, File)

DUBAI, United Arab Emirates (AP) — Iran, which has a history of broadcasting suspected forced confessions, aired a statement by a wrestler who faces the death penalty and whose case recently drew a critical tweet from President Donald Trump.

The television segment and authorities accuse Navid Afkari, 27, of stabbing a water supply company employee in the southern city of Shiraz amid demonstrations against Iran’s Shiite theocracy in 2018. Afkari's case has drawn the attention of a social media campaign that portrays him and his brothers as victims targeted over participating in those protests.

His case has also revived a demand inside the country that Iran, one of the world's top executioners, stop carrying out the death penalty. Even imprisoned Iranian human rights lawyer Nasrin Sotoudeh, herself nearly a month into a hunger strike over conditions at Tehran's Evin prison amid the coronavirus pandemic, has passed word that she supports Afkari.

Afkari and his brothers were employed as construction workers in Shiraz, a city some 680 kilometers (420 miles) south of the capital, Tehran. All three took part in demonstrations in 2018 that began in anger over Iran's cratering economy and spiraled into direct calls for the overthrow Iran's theocracy. Such unrest has continued sporadically in Iran in the time since, with authorities arresting thousands of people.

Afkari had local fame as a wrestler, a popular sport in Iran. A provincial court in Shiraz sentenced Afkari to death and his brothers Vahid Afkari and Habib Afkari to 54 and 27 years in prison, respectively, over the slaying.

Afkari's case has drawn the attention of an online campaign that's included a video statement from Dana White, the president of the mixed martial arts competition called the Ultimate Fighting Championship.

“He went to a peaceful protest in Iran and he's going to be executed for that,” White said in a video Friday. “He's one of us. He could be any of my fighters.”

White said he spoke to Trump, who had earlier tweeted out his own concern about Afkari's case.

“To the leaders of Iran, I would greatly appreciate if you would spare this young man’s life, and not execute him,” Trump wrote Friday. “Thank you!”

Trump has imposed crushing sanctions on Iran after unilaterally withdrawing the United States from the nuclear deal that Tehran struck with world powers. That decision led to Iran breaking all the limits of the deal, as well as a series of attacks across the Mideast that America has blamed on Tehran.

Later Saturday night, Iran responded to Trump's tweet with a nearly 11-minute state TV package on Afkari. It included the weeping parents of the slain water company employee, Hassan Torkaman. The package also showed footage of Afkari on the back of a motorbike, saying he had stabbed Torkaman in the back, without explaining why he allegedly carried out the assault.

The state TV segment showed blurred police documents and described the killing as a “personal dispute,” without elaborating. It said Afkari's cellphone had been in the area. It showed surveillance footage of him walking down a street, talking on his phone.

The footage resembled what one report has described as the at-least 355 coerced confessions aired by Iranian state television over the last decade. Those supporting Afkari also have accused police of torturing a confession out of him after finding the surveillance footage.

That comes after a United Nations special rapporteur in a recent report wrote about a “widespread pattern of officials using torture to extract false confessions" from those protesting Iran's government.

“Three separate detainees from the cities of Tehran, Tabriz and Ahvaz all made similar allegations that interrogators physically assaulted them, including by hand, with batons and with electric shocks, and that interrogators tried to force them to confess that entities outside the Islamic Republic of Iran had incited the protests,” special rapporteur Javaid Rehman wrote.

That report noted Iran's government told him the “Iranian constitution and penal code forbids and criminalizes torture.” Iran's mission to the United Nations did not respond to a request for comment over Afkari's case.

The speed at which Iran broadcast Afkari’s televised confession may signal it intends to execute him. Trump earlier this year tweeted about three other men due to be executed who later won a retrial. That has yet to happen in Afkari’s case, even as it has renewed a hashtag advocacy campaign in Farsi telling Iran (hashtag)donotexecute.

“Trump is worried about the life of a murderer while he puts many Iranian patients’ lives in danger by imposing severe sanctions," the agency said.