Iran debate puts problems on one man: the outgoing president 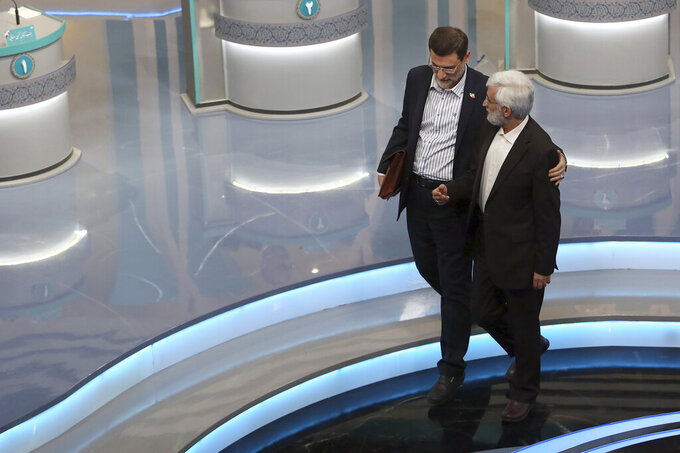 In this picture made available by Young Journalists Club, YJC, presidential candidates for June 18, elections Amir Hossein Ghazizadeh Hashemi, left, and Saeed Jalili leave at the conclusion of the second TV debates of the candidates in a state-run TV studio, in Tehran, Iran, Tuesday, June 8, 2021. Iran's seven presidential candidates on Tuesday put all the problems of the Islamic Republic squarely on the shoulders of the one man who wasn't there to defend himself: Outgoing President Hassan Rouhani. (Morteza Fakhri Nezhad/ Young Journalists Club, YJC via AP)

TEHRAN, Iran (AP) — Iran's seven presidential candidates on Tuesday put all the problems of the Islamic Republic squarely on the shoulders of the one man who wasn't there to defend himself: Outgoing President Hassan Rouhani.

After a raucous first debate, the aspirants in the three-hour televised debate focused their attention on Rouhani and mocked his administration's “hope” campaign that surrounded its now-tattered 2015 nuclear deal with world powers.

“They have mobilized sun and moon and the heavens to make some particular individual become president," said Mohsen Mehralizadeh, the sole reformist approved for the election, referring to Raisi.

The looming June 18 election will see voters pick a candidate to replace Rouhani, who is term limited from running again.

The election comes amid tensions with the West as negotiations continue to try and resuscitate the nuclear deal that then-President Donald Trump unilaterally withdrew America from in 2018. That accord saw Iran agree to limit its enrichment of uranium in exchange for the lifting of economic sanctions.

Hemmati, clearly frustrated by constantly being linked to Rouhani, even brought up Trump himself in an attempt to defend himself.

"Some of you must send a letter to Trump and tell him, ‘Mr. Trump, be happy, everything you did against the people of Iran, we blamed on Hemmati,’” he said.

The debate comes as Iranian authorities hope to boost turnout, held by officials as a sign of confidence in the theocracy since the country's 1979 Islamic Revolution. The state-linked Iranian Student Polling Agency has projected a 38% turnout from the country's 59 million eligible voters, which would be a historic low amid a lack of enthusiasm by voters and the coronavirus pandemic.

Raisi, believed to be a favorite of Iran's Supreme Leader Ayatollah Ali Khamenei, brought up the deficit of trust by the public.

Raisi's comments on the need to “remove oppressive sanctions” suggested he'd back returning to the nuclear deal, despite hard-liner anger over the accord.

But criticism remained almost always focused on Rouhani. Hard-liner Mohsen Rezaei, ignoring a question posed to him by the moderator, cuttingly said “you cannot eat hope” in a swipe at the president. He put corruption concerns squarely on Rouhani's government as well.

“Mafia kings are like vacuum cleaners and vacuuming up all the country’s resources," Rezaei said.

Even reformist Mehralizadeh criticized Rouhani's Health Ministry for being “negligent” in its response to the coronavirus.

For his part, Hemmati sought to distance himself from Rouhani, describing himself as being fired from the Central Bank in May after he declared his candidacy.

“I am not Rouhani’s representative," he insisted.

The structure of the debate — having candidates answer questions selected at random from large fish bowls — largely prevented aspirants from uniformly offering their opinions. It also limited debate between them, though by the end Hemmati's swings at Raisi saw the cleric raise his voice while defending himself in the last segment.

Hemmati criticized Raisi for allowing internet censorship in Iran to continue during his role as judiciary chief. He also seemingly backed Iran's underground rap scene in a nod to Iran's youth, which he described as mostly not wanting to vote.

Hemmati also criticized Iran's morality police for strictly enforcing the country's mandatory hijab, or hair covering for women. He described being “warned” by unnamed officials to stop criticizing the text messages authorities send to women over wearing loose hijabs or allowing it to fall to their shoulders.

Some want to “turn the White House into a mosque instead of developing Iran,” he said. “Then they ask why development has not happened? Why job opportunities have not been created? I have come to change this trend.”