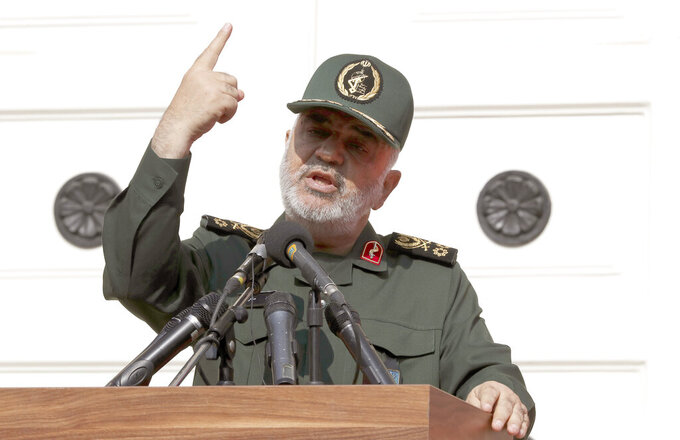 FILE - In this Nov. 2, 2019 file photo, Chief of Iran's Revolutionary Guard Gen. Hossein Salami speaks in a ceremony to unveil new anti-U.S. murals painted on the walls of former U.S. embassy in Tehran, Iran. The chief of Iran's powerful Revolutionary Guard warned Monday, Jan. 27, 2020, that it will retaliate against American and Israeli commanders if the U.S. continues to threaten top Iranian generals. “I warn them to withdraw from this field,” Gen. Hossein Salami told state television, adding if they do not, they “will definitely regret it.” (AP Photo/Vahid Salemi, File)

TEHRAN, Iran (AP) — The leader of Iran's Revolutionary Guard warned on Thursday that he has ordered his forces to potentially target the U.S. Navy after President Donald Trump's tweet the previous day threatening to sink Iranian vessels.

Iran also summoned the Swiss ambassador, who looks out for America's interests in the country, to complain about Trump's threat coming amid months of escalating tensions between the two countries.

While the coronavirus pandemic temporarily paused those tensions, Iran has since begun pushing back against the Trump administration's maximum pressure policy both militarily and diplomatically. The Guard on Wednesday launched Iran's first military satellite, unveiling a previously secret space program.

Speaking to state television Thursday, Guard Gen. Hossein Salami warned that his forces "will answer any action by a decisive, effective and quick counteraction.”

“We have ordered our naval units at sea that if any warships or military units from the naval force of America’s terrorist army wants to jeopardize our commercial vessels or our combat vessels, they must target those (American) warships or naval units,” Salami said.

The latest dispute comes after the U.S. Navy said last week that 11 Guard naval gunboats had carried out “dangerous and harassing approaches” to American Navy and Coast Guard vessels in the Persian Gulf. The Americans said they used a variety of nonlethal means to warn off the Iranian boats, which eventually left. Iran, meanwhile, accused the U.S. of sparking the incident, without offering evidence for the claim.

Iran has had tense encounters at sea for years with the U.S. Navy in the Persian Gulf and the Strait of Hormuz, through which 20% of all oil passes. The U.S. has patrolled the area to protect global shipping for decades, something Iran describes as akin to it patrolling the Gulf of Mexico.

Trump on Wednesday, facing a collapsing global energy market and the coronavirus pandemic amid his re-election campaign, tweeted out a warning to Iran, saying that he ordered the Navy to "shoot down and destroy any and all Iranian gunboats if they harass our ships at sea.”

“We don’t want their gunboats surrounding our boats, and traveling around our boats and having a good time,” Trump told reporters Wednesday evening at the White House. “We’re not going to stand for it. ... They’ll shoot them out of the water.”

The International Crisis Group, noting the tensions, urged both countries to create a deconfliction hotline to avoid a possible military confrontation.

“In the absence of a major diplomatic breakthrough, an indirect military communications channel could go some way toward ensuring, at least, that a single incident will not spark a wider conflagration,” it said in a report Thursday.

Iran in the past has rejected idea of a hotline.

Meanwhile, the Guard surprised analysts by sending a satellite into space on Wednesday from a previously unused launch pad and with a new system. While Iran stresses its program is peaceful, Western nations fear such a program will help Iran build intercontinental ballistic missiles.

State television on Thursday said Iran received signals from the satellite, without elaborating. While American officials have not acknowledged that the satellite reached orbit, open-source data from the U.S. military suggested the "Noor," or "Light" satellite now orbited the Earth.

Uzi Rubin, fellow at the Jerusalem Institute for Strategy and Security and the founder of Israel’s missile defense program, said the launch showed the Guard's “further gain in wresting for power and in building its own state within a state.”

“The very act of launching a military satellite in the midst of the coronavirus crisis that is affecting Iran too is a statement of self confidence and perseverance by the ayatollahs to the West but mainly to its own population,” Rubin said.

France said Thursday that it strongly condemns the launch and called on Tehran to “immediately halt any activity related to the development of ballistic missiles designed to be able to carry nuclear weapons, including space launch vehicles.”