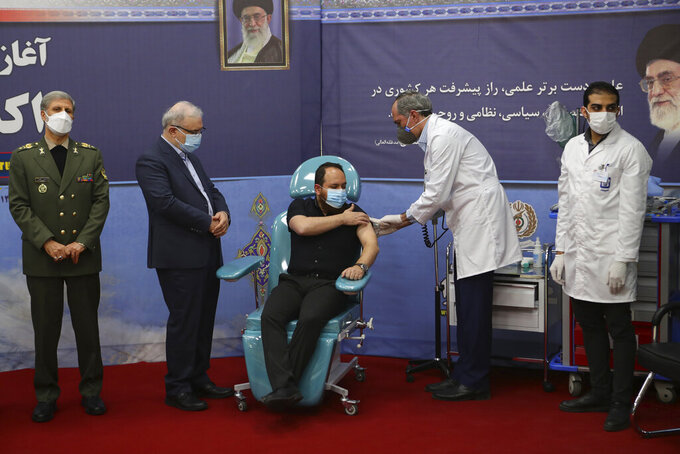 In this photo released by the official website of the Iranian Defense Ministry on Tuesday, March 16, 2021, a son of slain scientist Mohsen Fakhrizadeh receives Fakhra coronavirus vaccine as Defense Minister Gen. Amir Hatami, left, and Health Minister Saeed Namaki, second left, look on at a staged event in Tehran, Iran. Iran says that its third homegrown vaccine has reached the phase of clinical trials, even as details about its production remained slim. The Fakhra vaccine, is named after chief Iranian nuclear scientist Mohsen Fakhrizadeh, shown in a banner at rear, who was killed in a November 2021 attack that Iran blamed on Israel. (Iranian Defense Ministry via AP)

TEHRAN, Iran (AP) — Iran's campaign to inoculate its population against the coronavirus and promote itself as an emerging vaccine manufacturer inched on as health authorities announced Tuesday that the country's third homegrown vaccine has reached the phase of clinical trials.

Details about its production, however, remained slim.

Although Iran, with a population of more than 80 million, has so far imported foreign vaccines from Russia, China, India and Cuba to cover over 1.2 million people, concerns over its lagging pace of vaccinations have animated Iran's drive to develop locally produced vaccines as wealthier nations snap up the lion’s share of vaccine doses worldwide.

Iranian scientists, like elsewhere in the world, are rushing to condense the typically yearslong process to develop vaccines into a few months — a task that has acquired urgency as the country struggles to stem the worst virus outbreak in the Middle East and its economy reels from harsh American sanctions.

But details are scant about the Islamic Republic's vaccine production efforts. Two other Iranian vaccines are also in the phase of clinical trials, with the most advanced, called Barekat, tested on 300 people so far.

The government said 20,000 volunteers in the capital of Tehran and other cities will soon receive Iran's new vaccine, called Fakhra, which an official described to state-run media as being “100% safe,” without providing any evidence or data to support the claim. Earlier this week, the government launched a vaccine production factory it claims can make 3 million doses a day.

The vaccine introduced Tuesday on state TV was created by an affiliate of Iran's Defense Ministry, known as the Research and Innovation Organization.

Like with the Barekat vaccine still in the initial phase of clinical trials, the company used inactivated coronaviruses from 35,000 samples to make the new vaccine, a traditional technology based on cultivating batches of the virus and then killing it. By comparison, Western drug manufacturers are taking a newer gene-based approach to target the spikes on the outer structure of the coronavirus, a method that had never been approved for widespread use before.

At a ceremony attended by high-ranking officials in Tehran on Tuesday, Iranian state TV broadcast footage of just a single volunteer receiving the Fakhra vaccine, named after chief Iranian nuclear scientist Mohsen Fakhrizadeh, who was killed in a November attack that Iran blamed on Israel.

While Fakhrizadeh was known to lead the country's disbanded nuclear weapons program in the early 2000s, Iran has eulogized him as a leader of country's domestic coronavirus vaccine development drive. Fakhrizadeh's son was the first to receive the jab of the new vaccine.

The coronavirus has infected more than 1.7 million people in Iran and killed 61,427, according to health ministry figures released Tuesday — the highest death toll in the Middle East.

Nonetheless, Iran later said it would receive 4.2 million doses of the vaccine developed by Oxford University and U.K.-based drugmaker AstraZeneca through the global COVAX initiative, which was created to ensure that low- and middle-income countries have fair access to vaccines.

The Health Ministry has vowed to vaccinate all adults in the country by late September, although how the government will reach that ambitious goal remains uncertain. Iran says it expects to import doses for over 16 million people from COVAX.

The government has alleged that tough American sanctions imposed by former President Donald Trump in 2018 undermine efforts to purchase foreign-made vaccines and roll out mass inoculation campaigns like those making headway in the U.S. and Europe. Although international banks and financial institutions often hesitate in dealing with Iranian transactions for fear of being fined or locked out of the American market , U.S. sanctions do have specific carve-outs for medicine and humanitarian aid to Iran.