In Iran's subdued election, many voters appear to stay home 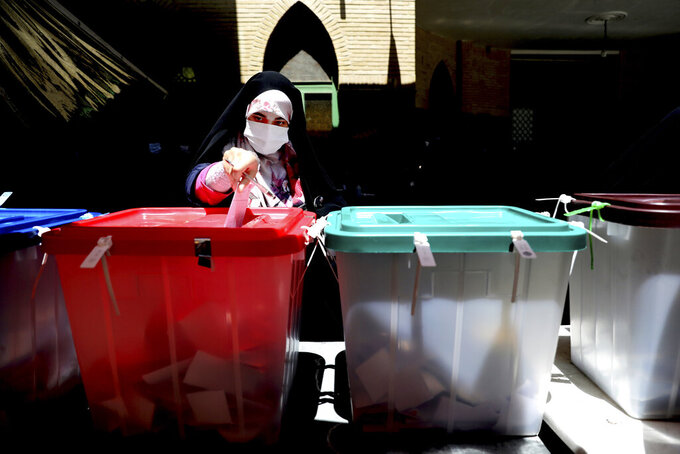 A voter casts her ballot for the presidential election at a polling station in Tehran, Iran, Friday, June 18, 2021. Iranians voted Friday in a presidential election that a hard-line protege of Supreme Leader Ayatollah Ali Khamenei seemed likely to win, leading to low turnout fueled by apathy and calls for a boycott. (AP Photo/Ebrahim Noroozi)

Amid rising anger and apathy over a presidential vote tipped in favor of Ebrahim Raisi, the hard-line judiciary chief cultivated by Iran's supreme leader, the election atmosphere was distinctly subdued.

In past elections, long lines snaked out of polling stations. Cars and minibuses zigzagged through the capital's chaotic streets blaring campaign slogans. Banners too big to miss championed the various candidates and blanketed buildings.

But this year, the streets were calm, traffic was light and the typical zeal was absent even from state television, which offered only tight shots of people putting paper ballots into boxes. Few, if any, other voters could be seen in the background.

“It is useless,” said Ali Hosseini, a 36-year-old unemployed resident in southern Tehran, about the exercise of voting. “Anyone who wins the election after some time says he cannot solve problem of the economy because of intervention by influential people. He then forgets his promises and we poor people again are disappointed.”

But that scene was at odds with what people saw at 16 different polling stations across Tehran, where lines were short and no more than eight voters at a time could be seen casting ballots. Some polls remained virtually deserted throughout the day — a stark contrast to ice cream shops and restaurants nearby. Of two dozen voters interviewed at various stations, more than half said they'd voted for Raisi. Listless poll workers listened to state radio, looked at their phones or chatted calmly.

While the government's turnout figures weren't expected until Saturday, the state-linked Iranian Student Polling Agency earlier this week estimated a turnout of just above 40%, which would be the lowest since the 1979 Islamic Revolution.

Signs of anxiety over turnout began to emerge at the highest levels of Iran's leadership days before polls opened. Fearing a boycott that might undermine the credibility of the theocratic system, officials across the political spectrum — from the powerful hard-line Revolutionary Guard to relatively moderate outgoing President Hassan Rouhani — urged people to vote. In an unprecedented televised speech on the final day of campaigning, Supreme Leader Ayatollah Ali Khamenei warned sternly of “foreign plots” to keep voters home and described participation as a way to show defiance toward the West amid heightened tensions.

And yet, despite the official warnings and admonishment from the news media, many Iranians struggled to see the point in voting. The country's clerical vetting body allowed only Raisi and a few other low-profile candidates, mostly hard-liners, on the ballot. The main moderate contender, former Central Bank chief Abdolnasser Hemmati, lacks the support base required to rally the masses. All their campaigns dealt with similar generalities: helping the unemployed, improving the economy, boosting Iran's self-sufficiency.

“None of the candidates are trustworthy,” said Nasrin, a 31-year-old accountant in central Tehran who declined to give her last name for fear of reprisals.

In the last election in 2017, she voted for Rouhani, whose administration struck Tehran's 2015 nuclear deal with world powers, granting Iran sanctions relief in exchange for curbs on its nuclear program. But three years later, then-U.S. President Donald Trump withdrew America from the accord and returned crushing sanctions, triggering the collapse of the Iranian riyal and destroying Rouhani's forecasts of an economic boom.

“I heard similar promises for a better life and more roles for women in past elections, but no change happened on the ground,” Nasrin said.

Another passerby in a middle-class Tehran district, 23-year-old Rojin Ahmadi, offered a similarly grim view of the candidates.

“None of them dared to offer a plan to show they would bring the country into normalcy,” she said, adding that she wasn't voting.

Public frustration with the status quo has swelled under Iran's mounting crises: global isolation, unprecedented U.S. sanctions and the coronavirus pandemic, which has killed over 82,600 Iranians — the highest death toll in the Middle East. But faith in the power of voting to change anything also had suffered badly.

The elimination of Rouhani allies and prominent reformists startled even high-ranking officials. Analysts describe this election as the least competitive in the Islamic Republic's history. Demoralized critics have mounted boycott calls on social media. Former hard-line populist President Mahmoud Ahmadinejad, barred from running a second time, seized on popular anger by repeating his decision to stay home for the vote. Rouhani, who is term limited, expressed regret over the disqualifications of reformists as he cast his ballot, hinting that a low turnout was a foregone conclusion.

“I wish we didn’t have so many problems and saw more turnout today,” he lamented.

As the conflict over whether to vote played out, Raisi supporters did not need much convincing. The cleric appeals to some impoverished Iranians for his anti-corruption campaign and outspoken criticism of the West. The U.S. Treasury Department sanctioned him in 2019 over his involvement in the mass execution of political prisoners in 1988, at the end of the Iran-Iraq war, and his time as chief of Iran's internationally criticized judiciary.

“He's clergy,” said Niloufar Mohammadi, a 19-year-old law student, explaining why she voted for Raisi. “Influential people listen to him.”