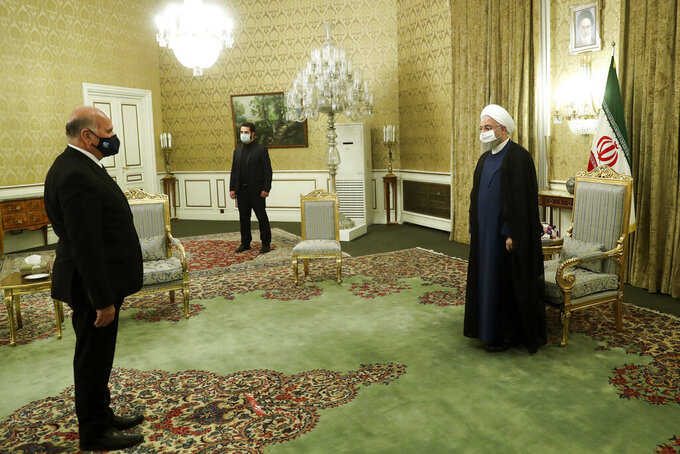 In this photo released by the official website of the office of the Iranian Presidency, President Hassan Rouhani, right, welcomes Iraqi Foreign Minister Fuad Hussein for their meeting, in Tehran, Iran, Saturday, Sept. 26, 2020. (Iranian Presidency Office via AP)

IRNA reported that Fuad Hussein planned to meet his Iranian counterpart Mohammad Javad Zarif and President Hassan Rouhani, in what marked his first visit to the Iranian capital.

Zarif visited Baghdad in mid-July, when he met with Hussein and Iraqi Prime Minister Mustafa al-Kadhimi. It was Zarif’s first visit to Iraq since a U.S. airstrike in January killed a top Iranian general, Qassim Soleimani, outside Baghdad’s international airport. The strike catapulted Iraq to the brink of a U.S.-Iran proxy war that could have destabilized the Middle East.

After Zarif’s trip, the Iraqi premier visited Iran in July.

The report did not elaborate on the main reasons behind the top Iraqi diplomat's two-day trip to Tehran.

Iran sees neighboring Iraq as a possible route to bypass U.S. sanctions that President Donald Trump re-imposed in 2018 after pulling the U.S. out of the 2015 nuclear deal between Tehran and world powers.

Last year, Iran’s exports to Iraq amounted to nearly $9 billion, the official IRNA news agency reported on Tuesday. It said the two nations will discuss increasing the amount to $20 billion.

Iran has seen the worst outbreak in the region, with more than 443,000 thousand confirmed cases and at least 25,300 deaths.

A news website affiliated with Iranian state TV, yjc.ir, reported that Iran cancelled all its flights to Iraqi cities until the religious holiday of Arbaeen, due to concerns over the coronavirus outbreak. The holiday marks the end of the forty days of mourning that follow annually on the death anniversary of the seventh-century Muslim leader Hussein, who was killed at the Battle of Karbala during the tumultuous first century of Islam’s history.

Iran fought an eight-year war with Iraq that killed nearly 1 million people on both sides, after former Iraqi dictator Saddam Hussein invaded in the early 1980s.