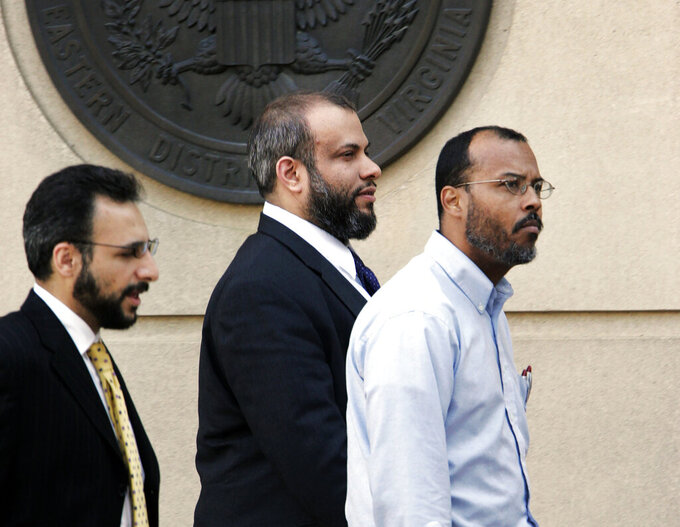 FILE - In this April 18, 2005 file photo, Ali Al-Tamimi, center, walks with two unidentified men, as he leaves the Albert V. Bryan Courthouse, in Alexandria, Va. A judge on Tuesday, Aug. 18, 2020 ordered Islamic scholar Ali Al-Tamimi, serving a life sentence for soliciting treason after the Sept. 11 attacks, be released from custody while he pursues his appeal. The order Tuesday grants release to Ali Al-Timimi in part because of concerns he is susceptible to the coronavirus and in part because of a recent Supreme Court case that could invalidate several counts on which he was convicted back in 2005. (AP Photo/Manuel Balce Ceneta, File)

FALLS CHURCH, Va. (AP) — A judge on Tuesday ordered an Islamic scholar serving a life sentence for soliciting treason after the Sept. 11 attacks be released from custody while he pursues his appeal.

The order from U.S. District Judge Leonie Brinkema in Alexandria grants release to Ali Al-Timimi in part because of concerns he is susceptible to the coronavirus and in part because of a recent Supreme Court case that could invalidate several counts on which he was convicted back in 2005.

Al-Timimi, a Washington D.C., native who obtained a doctorate in computational biology from George Mason University shortly before his arrest, has been imprisoned for the past 15 years, most recently at the Supermax facility in Florence, Colorado.

He was convicted of soliciting treason and other counts after prosecutors say he used his influence to steer a group of young men to try to join up with the Taliban after the Sept. 11 attacks.

Several of his followers, who played paintball games in the Virginia woods to train for holy war around the globe, got as far as Pakistan, where they received training from a militant group called Lashkar-E-Taiba. None actually ever joined the Taliban.

Al-Timimi argued that prosecutors overstated his influence with those who traveled to Pakistan, and that he was punished for unpopular speech rather than criminal conduct. Timimi preached that the Sept. 11 attacks portended a global holy war between Muslims and non-believers. At his trial, several of his followers testified tat Al-Timimi told them in a secret meeting just days after the Sept. 11 attacks that able-bodied Muslims had an obligation to defend the Taliban if they were able to do so.

His case has sat in an unusual procedural limbo for more than a decade, and an appellate court has never fully ruled on the validity of his convictions. Jonathan Turley, his appellate lawyer, has argued that prosecutors failed to turn over evidence that would have pointed to Al-Timimi's innocence. In particular, he has alleged that the government used a northern Virginia cleric named Anwar al-Awlaki as an informant, and that al-Awlaki tried unsuccessfully to lure Al-Timimi into illegal conduct as part of a government sting.

Al-Awlaki later left the U.S. and became a leader in al-Qaeda before he was killed in a U.S. drone strike.

Prosecutors have argued consistently that there is no evidence related to al-Awlaki to which Al-Timimi’s lawyers would have been entitled.

In her ruling, Brinkema said she was compelled to release Al-Timimi in part because he is at risk for contracting COVID-19 while imprisoned. In addition, several counts on which Al-Timimi was convicted for conspiring to commit a crime of violence could be invalidated because of a recent series of Supreme Court rulings.

Those Supreme Court cases, which say that federal law was impermissibly vague on what constitutes a “crime of violence,” have resulted in successful appeals across the country. Indeed, several members of the paintball group that was linked to Al-Timimi through the now-defunct Dar al Arqam mosque in Falls Church have recently been released as a result of the Supreme Court cases.

Brinkema, in her ruling, states that if the four counts in question are indeed overturned, the 15 years which Al-Timimi has already served would exceed his revised sentence.

The order is scheduled to take effect once Al-Timimi concludes a 14-day quarantine administered by the Bureau of Prisons.

Joshua Stueve, spokesman for the U.S. Attorney's Office for the Eastern District of Virginia, which prosecuted Al-Timimi, declined comment Tuesday on whether the government plans to appeal Brinkema's ruling.