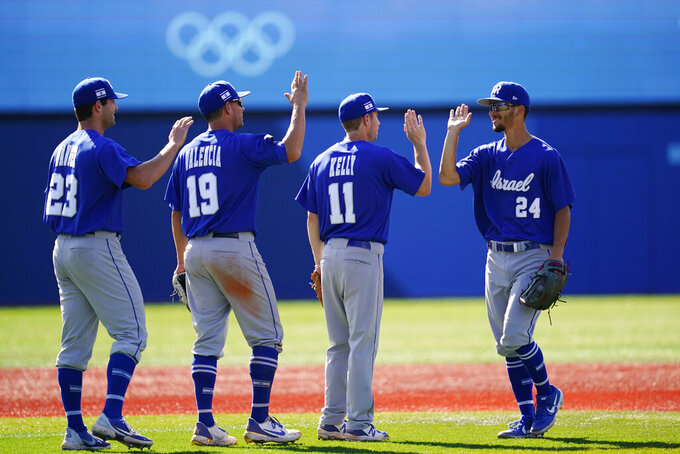 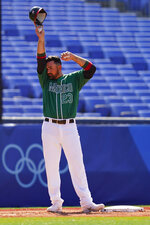 YOKOHAMA, Japan (AP) — Israel had just routed Mexico for its first Olympic baseball victory, riding a loud three-run homer by Danny Valencia that helped it jump to a six-run lead, and Nick Rickles wanted to check the reaction.

“I don't think it’s so much about beating Mexico.” he said after Monday's 12-5 win. “I think it’s a lot to just raise awareness for baseball in Israel. For me, I was just taking in the moment and seeing after the game the amount of love that we received from people back in Israel. We had messages on top of messages from people just saying thank you."

Israel (1-2) plays South Korea (2-1) on Tuesday with the chance to advance to a matchup against the United States or Japan on Wednesday that will determine a berth in the gold-medal game.

Rickles has been with the national team program for a decade and played a role in the Olympic buildup. Israel won its group at the 2017 World Baseball Classic and beat Cuba in the second round, then won a two-continent Olympic qualifying tournament and beat out the Netherlands for one of the six Olympic berths. It lost its opener to South Korea 6-5 in 10 innings.

“I don't think there was a lot of expectations coming into Israel playing baseball at all,” said Rickles, a 31-year-old catcher who retired from Philadelphia’s minor league system during spring training in 2019 to become a Milwaukee minor league coach.

He gave up six runs, four hits and three walks in two-plus innings.

“He is a great pitcher in Mexico. Last year in the winter, he even pitched a complete nine-inning game,” manager Benji Gil said through an interpreter. “Today just wasn't his day. He didn’t have a lot of dominance. He had several balls he was missing the location.”

“I'm in shock,” Gil said. “Not even in my worst nightmares did I think that this would be the result.”

Mexico lost right-hander Hector Velázquez and left-hander Sammy Solís just before the Olympics when they contracted COVID-19. Adrián González, a 39-year-old, five-time All-Star who made his last big league appearance in 2018, finished 3 for 11 with an RBI and Joey Meneses went 6 for 12 with four RBIs.

Zack Weiss (1-0), who allowed four runs and got no outs for Cincinnati in his only big league appearance on April 12, 2018, got the win by allowing one run in two innings in relief of starter Josh Zeid. Israel had 12 hits and set a tournament high for runs.

On a 91-degree Fahrenheit (32.7 Celsius) afternoon with blistering sun, Mexico clawed back to 6-5 before Salas, a 36-year-old right-hander, allowed Ian Kinsler’s leadoff double in the seventh and Valencia’s single.

Ryan Lavarnway, 5 for 13 in the Olympics, doubled up the left-center gap in the first, and Rickles hit an RBI single with two outs. Lavarnway, who played four games for Cleveland in June when Austin Hedges went on the concussion injured list, tried to score from second on Rickles’ hit and was thrown out by left fielder Meneses.

Barreda walked his first two batters in the the third and Valencia, exactly a week shy of the third anniversary of his last big league at-bat, rocketed an armpit-high fastball 10 rows deep into the left-field seats. Rickles greeted reliever Sasagi Sanchez with a two-run single.

“I hammered it, to be honest. I crushed that ball," Valencia said. “The team needed it. It got the momentum going.”

Kim Hyun-soo capped a three-run rally in the ninth inning with his fourth hit, a two-out single over Julio Rodriguez off Arizona minor leaguer Luis Castillo, and South Korea (2-1) got its second walk-off win.

Former St. Louis Cardinals closer Seunghwan Oh (1-0) relieved with a runner on in the top half and got three straight groundouts.

Juan Francisco, seven years removed from his last major league at-bat, hit a two-run homer halfway up the center-field scoreboard, the ball bouncing off the figures indicating the pitch was 148 kph (91 mph). The 34-year-old Francisco stood at the plate, raised his bat in his right hand and pointed at the scoreboard with his left, then did a quick dance as he watched the fourth-inning drive off Lee Eui-lee.

Raúl Valdés, a 43-year-old left-hander whose last big league appearance was with Houston in 2014, allowed one run — on Yang Eui-ji's first-inning sacrifice fly — and seven hits in 5 1/3 innings.

The Dominicans (1-2), who scored their first run on a wild pitch, play an elimination game Tuesday against the Israel-South Korea loser.