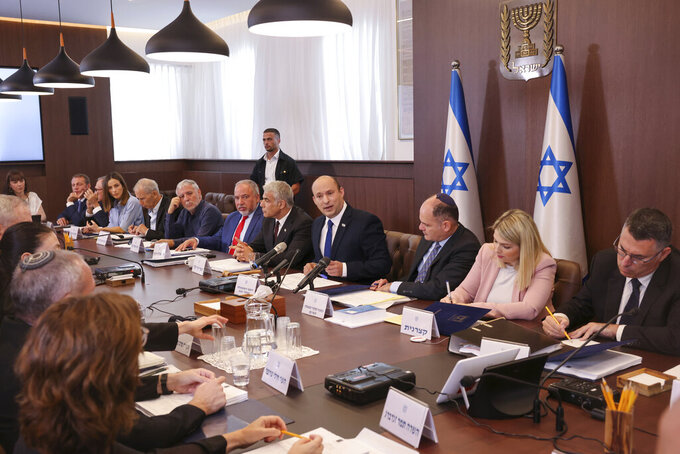 Israeli Prime Minister Naftali Bennett, center, chairs the first weekly cabinet meeting of the new government in Jerusalem, Sunday, June 20, 2021. Bennett opened his first Cabinet meeting on Sunday since swearing in his new coalition government with a condemnation of the newly elected Iranian president, whom he called “the hangman of Tehran.” (Emmanuel Dunand/Pool Photo via AP)

JERUSALEM (AP) — Israel’s government approved Sunday the establishment of an independent state commission of inquiry into a deadly disaster at a Jewish holy site in April that left 45 people dead.

It will be headed by a current or former senior judge, and its members selected by the country’s chief Supreme Court justice.

Some 100,000 people, mostly ultra-Orthodox Jews, gathered for the April 29 holiday festival in northern Israel despite coronavirus restrictions limiting outdoor assemblies to 500 people, and longstanding warnings about the safety of such gatherings. The state comptroller’s office had previously issued a pair of reports in 2008 and 2011 warning that the conditions at Mount Meron were dangerous.

Hundreds of people funneled through a narrow passageway descending the mountain's holy site during the festival. A slippery slope caused people to stumble and fall, precipitating a human avalanche that killed 45 people and injured at least 150.

The police launched an investigation into the disaster, but to date have yet to make any arrests.

The government said the commission would investigate the officials “who made the decisions that led to approving the event and determining the framework that was approved and its terms.”

Experts had long warned the Mount Meron complex was inadequately equipped to handle the enormous crowds that flock there during the springtime holiday, and that existing infrastructure was a safety risk.

Netanyahu’s political allies, including ultra-Orthodox lawmakers, walked out on a Knesset committee hearing that discussed forming an investigation last month. Families of the mostly ultra-Orthodox victims of the disaster had called on Netanyahu to take action and form an independent state commission to investigate the incident.

Bennett said at the start of his newly formed government’s first Cabinet meeting that “the responsibility is on our shoulders to learn the lessons to prevent the disaster to come."

“The commission cannot bring back those who died, but the government can do everything to prevent an unnecessary loss in the future,” he said.

Defense Minister Benny Gantz, one of the ministers who advanced the motion to launch the commission, said in a statement: “We must make sure that a tragedy of this nature never repeats itself. The taskforce’s purpose is, above anything else, to save human life."