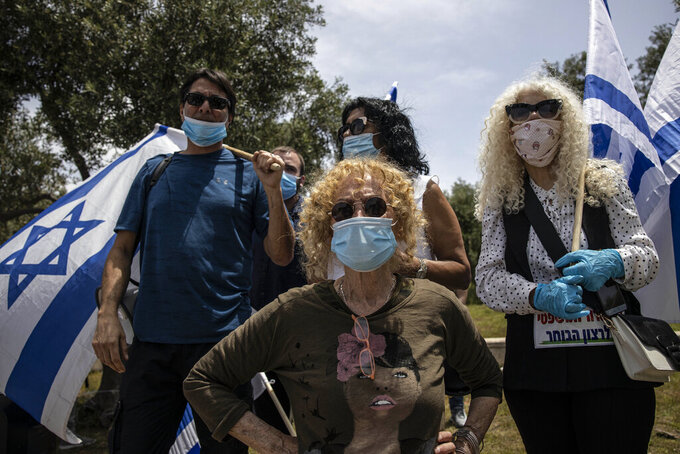 Supporters of Prime Minister Benjamin Netanyahu wear a masks amid concerns over the country's coronavirus outbreak during a protest by in front of Israel's Supreme Court in Jerusalem, Sunday, May 3, 2020. Israel's high court heard petitions Sunday that seek to block Prime Minister Benjamin Netanyahu from forming a government because he has been charged with serious crimes. (AP Photo/Tsafrir Abayov)

JERUSALEM (AP) — With the fate of Prime Minister Benjamin Netanyahu on the line, Israel’s Supreme Court began discussions Sunday on the question of whether the embattled leader can form a new government while facing criminal indictments.

The court’s decision, expected later this week, is shaping up as a watershed moment in Israeli history.

A ruling preventing Netanyahu from returning for another term would almost certainly trigger an unprecedented fourth consecutive election in just over a year and draw angry, perhaps violent, reactions from Netanyahu’s supporters accusing the court of inappropriate political meddling. A ruling in favor will be seen by critics as further weakening the country’s fragile democratic institutions and a victory for a prime minister bent on escaping prosecution.

“The High Court of Justice is facing its most important verdict ever,” former Prime Minister Ehud Barak, a staunch critic of Netanyahu’s, wrote in the Haaretz daily.

“The High Court can make its name for generations in one moment’s brave decision,” he wrote. “On the other hand, should the court opt for legalistic niceties, irrespective under what intricate pretexts, it too will be crushed further down the road.”

The court challenge comes in the wake of Netanyahu’s agreement last month to form an “emergency” government with his rival, Benny Gantz.

After battling each other in three inconclusive elections over the past year, the two men cited the country’s coronavirus outbreak for their power-sharing agreement. But the deal includes a number of provisions — including the creation of the new office of “designated prime minister” — that appear to have little to do with the pandemic. Critics say they are meant to allow Netanyahu to remain in office throughout his upcoming trial.

Netanyahu has been charged with fraud, breach of trust and accepting bribes in a series of scandals in which he is accused of offering favors to media moguls in exchange for favorable press coverage. Netanyahu denies the accusations and says he is the victim of a witch hunt. His trial was postponed in March due to restrictions his hand-picked interim justice minister placed on the courts after the coronavirus crisis erupted and is scheduled to commence later this month.

In Sunday’s proceedings, the court heard arguments on whether an indicted politician like Netanyahu can be given authority to form a new government. On Monday, the justices will look at whether the coalition agreement violated the law.

Under the deal, Netanyahu and Gantz would be sworn in together, with Netanyahu serving first as prime minister and Gantz as the designated premier. After 18 months, the two will swap positions. The new position will enjoy all the trappings of the prime minister, including an official residence and, key for Netanyahu, an exemption from a law that requires public officials who are not prime minister to resign if charged with a crime.

Netanyahu is eager to remain in office throughout his trial, using his position to lash out at the judicial system and rally support among his base. The coalition deal also gives him influence over key judicial appointments, creating a potential conflict of interest during an appeals process if he is convicted.

In a reflection of the case’s importance, a panel of 11 justices are hearing the case — a much larger number than the usual three- or five-judge panels. In another rarity, the hearings were broadcast live on national television and on the court’s website. Due to the outbreak, the judges, attorneys and clerks wore face masks, and plastic barriers separated each of the 11 justices on the bench.

The high court has become a lightning rod for criticism by Netanyahu and his political allies, who accuse it of overreach and political interference. The long-time leader’s opponents consider it a bastion of democracy under dangerous assault.

Michael Rabello, an attorney representing Netanyahu’s Likud party, said that over 1 million Israelis had voted for him with the knowledge he could be prime minister. “How can you say that this panel can replace the voters?” he asked the court.

Pro-democracy demonstrators have been taking to the streets weekly to protest Netanyahu’s continued rule, keeping their distance from one another in line with social-distancing rules. On Sunday, several dozen demonstrators gathered outside the Knesset, Israel’s parliament, in support of the court and watched a screening of the hearing.

Eliad Shraga, head of the Movement for Quality Government in Israel, one of the groups petitioning the court, said it was “unconscionable that a man like this will go in the morning to court to sit in the dock and in the evening will manage the Security Cabinet and send us and our children to battle.”

The justices have little time. They need to rule by Thursday, the deadline for parliament to choose a new prime minister. If that deadline is missed, a new election would be triggered.

Eli Salzberger, a law professor at the University of Haifa, said the panel consisted of the court’s 11 most senior justices and it was impossible to predict which way the diverse group would lean. “We cannot really map the court ideologically,” he said.

Last week, Israel’s attorney general, Avichai Mandelblit, said in an opinion to the court that while Netanyahu’s indictments “raise significant problems,” there was no legal basis for barring him from serving while facing criminal charges.

Salzberger said Mandelblit’s recommendation gave a boost to Netanyahu's side, but noted the court has disagreed with the attorney general in the past. “It’s not a final decision," he said.