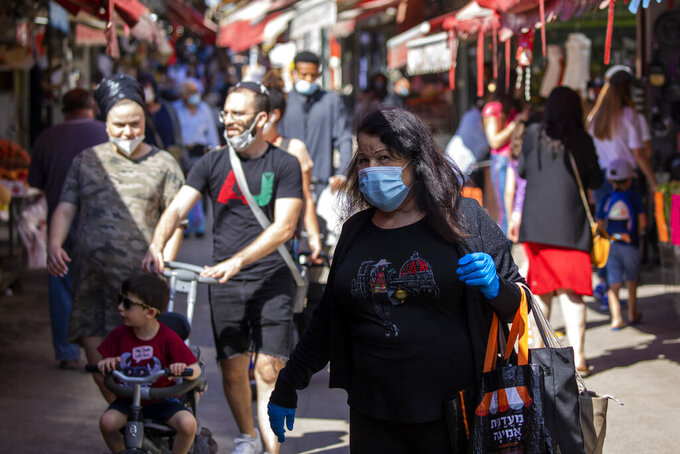 People wearing masks visit a food market that was shut down in order to reduce the spread of the coronavirus, as markets, shopping malls, gyms are reopen as Israel seeks to exit the virus lockdown in Tel Aviv, Israel, Thursday, May 7, 2020. (AP Photo/Ariel Schalit)

JERUSALEM (AP) — The head of Israel's Shin Bet security service reportedly said Monday that he opposes the continued use of his agency's phone-snooping technology to track coronavirus cases.

The testimony by Nadav Argaman prompted Israeli Cabinet ministers to freeze planned legislation that would have extended the use of the controversial practice, the Haaretz daily reported.

The Israeli government authorized the Shin Bet to use its technology in March to help halt a burgeoning coronavirus outbreak.

The technology allowed the government to retrace the steps of people infected with coronavirus and to identify people who had come into contact with them in the previous two weeks. Those deemed at risk of infection were then ordered to go into protective quarantine.

The government defended the practice, normally used by the Shin Bet to track suspected Palestinian militants, as a way to save lives. But critics said it violated privacy rights. The order authorizing temporary use of the technology is set to expire this month.

According to Haaretz, Argaman said his agency should not be involved in a civilian issue. With the coronavirus largely under control, he also said the use of the technology was no longer necessary.

He proposed using civilian tools, such as a phone-tracking app developed by the Israeli Health Ministry, as an alternative, the report said. The app, called “The Shield,” requires Israelis to consent to its use.

Israel's new government is drafting legislation that would give it emergency powers to deal with a potential new wave of the coronavirus. The country has experienced a small spike in cases since easing a two-month lockdown last month.

Tehilla Shwartz Altshuler, an expert on privacy issues at the Israel Democracy Institute think tank, hailed the apparent decision to halt the use of the tracking technology.

“Even the head of the ISA understands that civil rights were sacrificed in favor of this surveillance," she said, referring to the Shin Bet. She called for using less invasive tactics for preventing the virus from spreading.