Israeli teen Deni Avdija drafted by Wizards at No. 9 overall 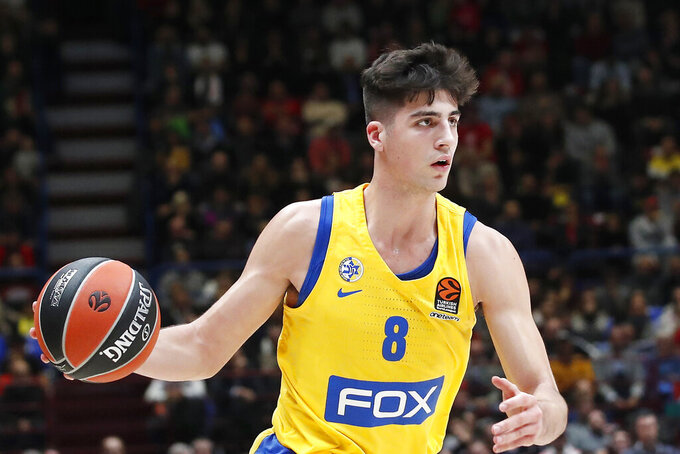 WASHINGTON (AP) — Deni Avdija became the highest-drafted player from Israel in NBA history by going No. 9 overall to the Washington Wizards on Wednesday night — a year after the team made Rui Hachimura the first player from Japan to go in the first round.

At age 19, the 6-foot-9, 225-pound Avdija is considered a versatile, playmaking forward with a still-developing game. He helped Israel win the FIBA U-20 European Championships in 2018 and 2019, and is a good ballhandler and passer who could profile as a point forward with Washington.

There are questions about his shooting touch and how long it might take for him to adjust to the NBA game.

“His shot is not bad,” Washington coach Scott Brooks said. “It's going to get better.”

Avdija became the youngest player to play for Maccabi Tel Aviv when he began his professional career in 2017.

Now he is the first top-10 NBA draft pick from Israel.

“For me just to represent my country and to make history, that's a blessing,” Avdija said from Tel Aviv during a video conference with reporters Wednesday. “I have the whole nation behind me. I hope I'm going to represent well.”

As for the idea of inspiring young Israelis to pursue basketball, he said: “I’m just glad they have somebody to look at and learn (from) — and just be motivated to see that us being a small country doesn’t mean that we can’t do big things.”

Washington also acquired Michigan State point guard Cassius Winston as part of a swap with Oklahoma City involving second-round picks. A person familiar with the deal said the Thunder will get Czech guard Vit Krejci, who went to the Wizards with the 37th overall pick; Oklahoma City then used its slot at No. 53 on Winston for Washington. The person spoke to The Associated Press on condition of anonymity because the trade was not announced.

Brooks is entering the last season of his five-year contract and he is counting on making some improvement thanks to the return of point guard John Wall, the five-time All-Star who missed most of the 2018-19 season after heel surgery, then all of 2019-20 with a ruptured left Achilles tendon.

Barring a trade, Wall and shooting guard Bradley Beal will be counted on to lead Washington back to relevance after missing the playoffs for the past two years. The Wizards went 1-7 in the coronavirus pandemic “bubble” to close a 25-47 season, which followed a 50-loss campaign in 2018-19.

Beal finished second in the NBA in scoring this past season by averaging 30.5 points, behind only James Harden.

“I've got two good leaders in John and Brad coming back," Brooks said. "We all have a lot to prove — myself, John, Brad, Rui. ... Everybody on our team has a lot to prove and we got another guy that's going to want to play with that chip on their shoulder.”

In 2019, when the Wizards selected Hachimura at No. 9 overall, Sheppard still was toting an interim tag following Ernie Grunfeld’s departure.

Hachimura is among the young players Washington is figuring will help down the road, along with 2018 first-round pick Troy Brown Jr. and center Thomas Bryant.