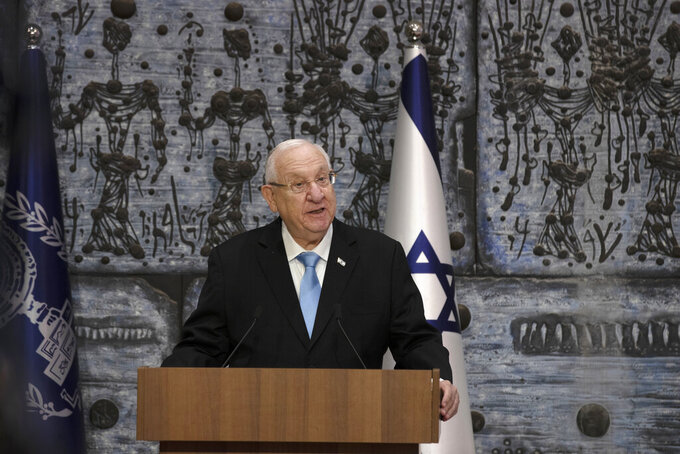 TEL AVIV, Israel (AP) — President Reuven Rivlin expressed his frustration with Israel's deadlocked political system on Wednesday, saying he'll choose a candidate for prime minister he believes can overcome past grievances, forge “unconventional” alliances and is most likely to form a government.

He spoke a week after Israel's fourth inconclusive election and days before he gives a party leader the daunting task of trying to form a majority coalition in the Knesset.

That process will begin with two days of consultations with party leaders and coincide with the resumption of Prime Minister Benjamin Netanyahu's corruption trial. The trial, coupled with the coronavirus crisis, has exposed deep divisions in Israeli society.

Rivlin said Wednesday that his decision will be based on which party leader can “earn the trust of the Knesset” and build “a government that will succeed in mending the rifts between us and rehabilitate Israeli society.”

That, he said during the official presentation of election results, is what Israelis want, rather than an unprecedented fifth consecutive election.

Rivlin is obligated by law to choose the party leader he thinks has the best chance at forming a government.

In most cases, that choice falls to the leader of the largest party, in this case Netanyahu's Likud. But last week's election yielded a fragmented parliament with 13 parties, none of which has a clear path to forming a coalition.

Late Wednesday, Netanyahu broke a period of relative post-election quiet by appealing to two former allies to “come home” and support him.

Gideon Saar and Naftali Bennett are former Netanyahu aides who share the prime minister's nationalistic ideology but broke away to form their own parties after bitter breakups with Netanyahu.

Saar has vowed never to sit in a Netanyahu-led government, while Bennett has not committed either way.

In a nationally televised statement, Netanyahu called on the two to put aside their differences with him. “I call on you, come home to your natural place, on the right,” he said. “Let's unite and together form a stable national government.”

Bennett quickly responded, saying he was committed to forming a government committed to “rescuing Israel from the chaos.” Saar, meanwhile, rejected the overture, repeating his campaign promise not to serve in a Netanyahu government.

Earlier, senior Likud officials pushed back against Rivlin's remarks, suggesting that as the largest party in the Knesset with 30 seats, it should get the first chance to forming a government.

“The president does not determine the results of the election! He must not be a political actor,” Knesset Speaker Yariv Levin, Energy Minister Yuval Steinitz and Public Security Minister Amir Ohana said in a joint statement.

Netanyahu’s religious and nationalist allies are more ideologically aligned. But even with their support, he has secured only 52 seats in parliament — well short of the required 61-seat majority.

Netanyahu’s opponents secured 57 seats, also short of a majority, while two parties have not committed to either side.

Netanyahu's opponents, some of them onetime allies, campaigned on the idea that he's no longer fit to serve. Part of their argument centers on charges against Netanyahu of fraud, breach of trust and accepting bribes. He has denied all charges and has accuses the media, law enforcement and justice system of a “witch hunt” to remove him from office.

But the ethics questions will share the spotlight with Rivlin's deliberations as Netanyahu appears in court for a new phase in his trial.

Despite their larger numbers, Netanyahu's opponents have little in common other than their opposition to him.

The party leaders are now negotiating the terms of any such alliances. Two parties, including the right-wing Yamina party, and an Arab Islamist party, have not committed to either side and could potentially play kingmakers.

While Rivlin's position as figurehead president is largely ceremonial, he has taken an active role in previous elections in trying to get party leaders to form a government and break the cycle of repeat elections. Last year, he urged the leaders to “get a grip” and stop their bickering.

It wasn't to be. An alliance between Netanyahu and his main rival, meant to steer the country through the coronavirus crisis, was plagued by infighting and collapsed in December. Rivlin urged the party leaders to get over their rivalries and listen to weary Israeli voters.

“I am hopeful that those elected by the public will succeed in hearing the people of Israel, be wise enough to hear its demand for unconventional unions, for cooperation crossing sectors, for constructive and devoted work for the sake of Israeli citizens,” Rivlin said.