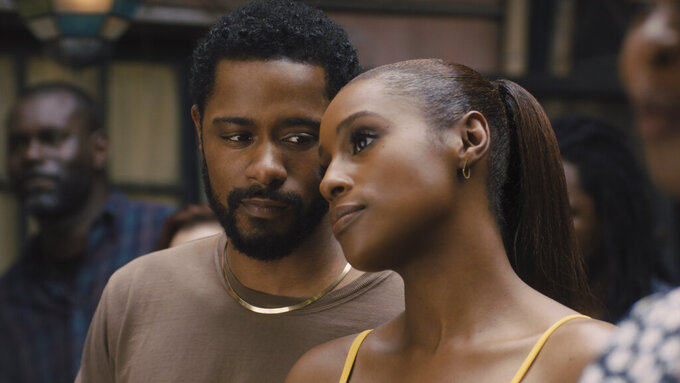 This image released by Universal Pictures shows LaKeith Stanfield, left, and Issa Rae in a scene from the film "The Photograph." The fourth season of Rae's show“Insecure,” premieres Sunday on HBO. (Universal Pictures via AP) 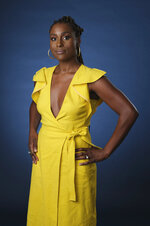 NEW YORK (AP) — The HBO hit “Insecure” typically airs during the summer, but series creator Issa Rae has been moving like the Energizer Bunny with a schedule so booked and busy, the show’s return had to be delayed.

But for good reason.

She filmed two movies ("The Photograph," “The Lovebirds"). She executive produced and appeared in HBO’s “A Black Lady Sketch Show.” The actress who breaks out in raps to cope with life on “Insecure” launched her own record label. And Rae is writing, producing and starring in a new movie called “Perfect Strangers" and producing another HBO series, “Rap (expletive)," about a female rap group trying to find a breakthrough.

“I was just relieved to not be doing the show and to be working on other things so much so that I was finally grateful to come back when I was done with those projects,’” Rae said of “Insecure,” which returns Sunday. “I love this show. I love the people on it. I love creating it and making it. It just made me more appreciative of what we were doing.”

In an interview with The Associated Press, 35-year-old Rae spoke about her Emmy-nominated series and the show within the show, which this season is a docuseries about a missing black woman. Rae also discusses her film “The Lovebirds,” which moved from its theater release to Netflix because of the coronavirus pandemic.

AP: What can we expect from season four?

Rae: This season is really about whether the people in your life are there for a reason or a season. It really is about that transitional period when you go from your twenties and you’re kind of figuring out who you are, to your 30s when you really know who you are. You know what you’re going to tolerate and what you’re not going to tolerate and who you want around you to continue that journey.

This season specifically, there’s a lot of relationships mirrored to my own personal friendships and my own relationships dealing with the same kind of transitions and the questions.

AP: It was funny seeing Porsha Williams from “Real Housewives of Atlanta” and Masika Kalysha from “Love and Hip-Hop” on the show. Did they have to audition?

Rae: Masika auditioned. That was just a surprise of going through the audition tape and being like, “Oh good, she’s good. It’s great.” And just being like, “OK, cast her.”

For a show within a show, those are always very specific and you have a cast in mind and then we just approach them and they’re down.

Rae: It’s a way to honor our legends. It’s so fulfilling to be able to work with them. To have them be a part of our own cultural moment.

AP: Even the story line is interesting.

Rae: It’s so ridiculous. That even came about from our random obsession with true crime podcasts and true crime docuseries and being like, “There’s never black people.” Nobody would dedicate a whole podcast or docuseries to missing black people. Nobody does a “To Live and Die in LA” if the girl is black. We were just trying to document that.

AP: How have you been able to balance all the projects you’re working on?

Rae: I’m not going to lie — I’m toppling plates over here. I have not been great at balancing, but the people that I work with have been amazing. This quarantine, I would have been on a three-week press tour for “Insecure” and “Lovebirds” while having to meet a deadline to rewrite a movie and write a pilot. I don’t know how I was going to do that. I wasn’t going to do that. I was going to kill myself. Now to be able to have this forced time to be able to dedicate to creating and writing has been so fulfilling. Obviously these circumstances are terrible but it’s really just allowed me to put a pause on so much and to focus on what I love to do; the parts that I like to do. I actually don’t like traveling for the press, really. I don’t like the promotional stuff for the most part. It’s stressful. It takes a lot of time. You forget, "Oh this is what I love to do. I’m a writer.”

AP: What is different doing the films compared to your TV series? What did you learn?

Rae: The experiences were very different. “The Photograph” felt like, “Oh I’m making a movie with family, it’s familiar territory. It feels like home.” I shot that after I shot “The Lovebirds,” which was kind of a newer process for me just because it was just a different environment, and I think I was still more actively involved in the story of it, the rewriting of it. It was so fun to work with Kumail (Nanjiani). Whereas with “The Photograph,” it was like executing (director) Stella’s vision and kind of being immersed in her world and her idea for the story. Both of those made me actively miss “Insecure.”

AP: Were you excited Netflix picked up “The Lovebirds” since we currently can’t go to the movies?

Rae: I was super grateful. I was kind of bummed. Given the circumstances, I was like, “Damn, we’re not ... but nobody’s going to go to the movies. This is before, obviously, it was announced that it was a pandemic.

But then with the movie theaters shutting down I was like, “OK, that’s a good decision” ... The fact that Netflix was interested in our movie, it just felt like the best opportunity to showcase it and have maximum people view it during this time.

AP: How have things been going with your record label, Raedio?

Rae: It’s been a learning process. It’s been exciting to just meet with new artists and to be passionate. I feel like Suge Knight every single time when I’m just like, “Come to Death Row, I got you, but it’s much less malicious.” We’re going to take care of you over here. We’re going to put you on a platform and we’re going to give you the space to be you and it’s coming from a place of just pure fandom.

We’re in music supervision. We have a music library. We’re in publishing. We’re publishing songwriters. We’re doing podcasts. It is an audio company. I think that’s what differentiates us. It’s a business.

AP: Have you been able to reflect on your accomplishments?

Rae: I sit and reflect from time to time, but whenever I sit and reflect I just get more anxious. I get worried. I kind of don’t want to think about all that I have going on because then it becomes scary ... It’s like walking on air and then you look below you and then you’re going to fall. That’s how I feel. If I pay attention too much then I’ll realize, “What the f--k am I doing? Why do I think I could do all this?” I have a capable team of people that I work with. It really is just about doing it — just doing it while I can.