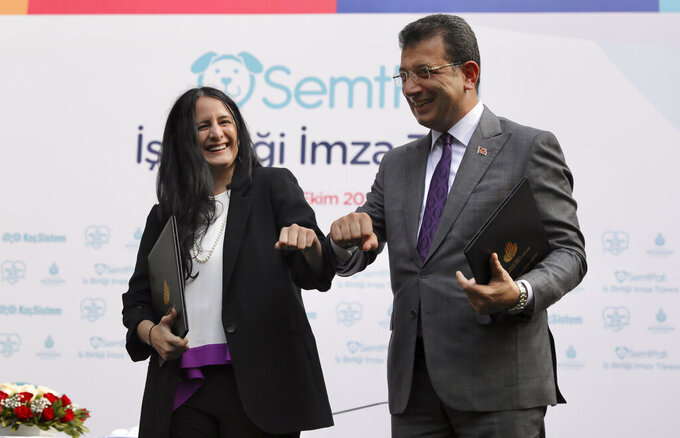 In this Thursday, Oct. 22, 2020 photo provided by Istanbul Mayor's Office, Ekrem Imamoglu, the mayor of Istanbul, right, greets Ipek Kirac of Koc Sistem, after signing an agreement for a mobile system to monitor the city's stray dogs, in Istanbul. A city government spokesman says the mayor of Istanbul has tested positive for COVID-19 and received treatment at a hospital. The city spokesman tweeted Saturday, Oct. 24, 2020 that Mayor Ekrem Imamoglu's condition is good. Imamoglu represents the opposition Republican People’s Party and became one of Turkey’s most recognizable politicians after winning office in June 2019. (Istanbul Mayor's Office via AP) 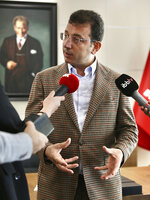 ANKARA, Turkey (AP) — The mayor of Istanbul has tested positive for COVID-19, a spokesman for the Turkish city said Saturday.

Mayor Ekrem Imamoglu has received treatment at a hospital and his condition is good, spokesman Murat Ongun tweeted.

Istanbul, a city of 16 million people, has recorded 40% of Turkey’s total reported coronavirus cases, according to Health Minister Fahrettin Koca.

Imamoglu, who represents the opposition Republican People’s Party, or CHP, became one of Turkey’s most recognizable politicians after winning office in June 2019.

His success was part of a series of victories for the CHP in major cities , including capital Ankara.

The mayor and other opposition figures have criticized the Turkish government’s approach to tackling the virus, including its decision to publish data only on patients displaying COVID-19 symptoms rather than including asymptomatic individuals.

The country on Friday reported 2,165 new confirmed cases in people with symptoms, the highest daily number since restrictions to combat the outbreak were imposed in May.