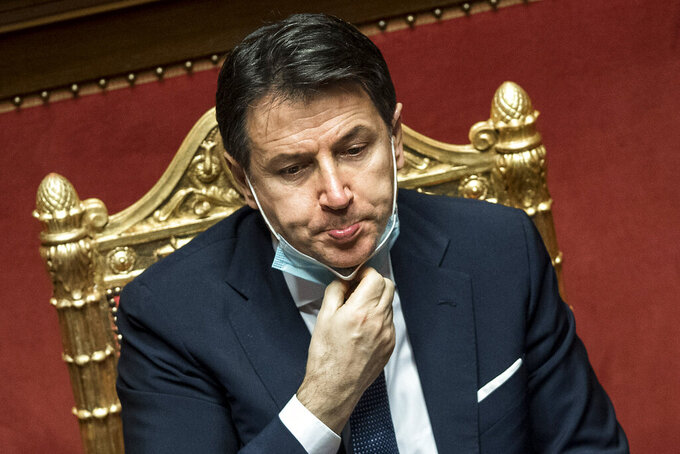 Italian Prime Minister Giuseppe Conte speaks during his final address at the Senate prior to a confidence vote, in Rome, Tuesday, Jan. 19, 2021. Italian Premier Giuseppe Conte fights for his political life with an address aimed at shoring up support for his government, which has come under fire from former Premier Matteo Renzi's tiny but key Italia Viva (Italy Alive) party over plans to relaunch the pandemic-ravaged economy. (Roberto Monaldo/ Lapresse via AP)

ROME (AP) — Italian Premier Giuseppe Conte intends to offer his resignation on Tuesday, his office said Monday, a move seen as gamble that the embattled leader will get a fresh mandate from the president to try to forge a more viable coalition.

Conte survived two confidence votes in Parliament last week but crucially lost his absolute majority in the Senate with the defection of a centrist ally, ex-Premier Matteo Renzi. That hobbled his government's effectiveness in the middle of the pandemic, which has devastated Italy's long-stagnant economy.

Conte's office said Monday night that the premier will inform his Cabinet at a meeting Tuesday morning of his “will to go to the Quirinale (presidential palace) to hand in his resignation."

Then Conte intends to head to the palace to meet with President Sergio Mattarella, who, as head of state, can accept the resignation, possibly asking the premier to then see if he can assemble a more solid coalition that can command a dependable majority in Parliament.

Mattarella has frequently stressed the need for the nation to have solid leadership as it struggles with the COVID-19 pandemic, with its devastating effects on Italy's long-stagnant economy.

After consultations with leaders of both government and opposition parties, the president could also decide to tap someone else deemed to have better chances of forming a more solid government. If no one can forge a more viable, dependable coalition, Mattarella has the option of dissolving Parliament, setting the stage for an election two years early.

Conte has led a long-bickering center-left coalition for 16 months. Before that, for 15 months, he headed a government still with the populist 5-Star Movement, Parliament's largest party, but in coalition with the right-wing League party of Matteo Salvini.

That first government collapsed when Salvini yanked his support in a failed bid to win the premiership for himself.

Conte, while identified with the 5-Star Movement, doesn't head any party. So, in a departure from Italy's frequent political crisis, he won't be part of the formal consultations with Mattarella, who meets with party leaders coming in rapid succession to the palace for talks.

Key support for whatever government might come next could come from the centrist opposition party of former Premier Silvio Berlusconi. Just hours before the announcement by Conte's office, the media mogul said he was trusting the “political wisdom” of Mattarella to indicate the way out of the crisis.

“The high road is one only,” Berlusconi said in a statement. That solution would be a “new government that would represent substantial unity of the country in a moment of emergency” or it could be a new election “to give back the (deciding) word to the Italian” voters.

By the end of February, the Italian government must inform the European Union how it intends to spend some 200 billion euros ($250 billion) in recovery funds, focused on reforming the country's health and other institutional systems.

One of Renzi's issues with Conte was what he contended was too much decision-making power concentrated in the premier's hand on the funding programs.

Salvini said he had called a meeting of center-right leaders, including far-right-leader Giorgia Meloni and Berlusconi’s fold to bolster the opposition’s press for elections.

“The Italians need hospitals, open and safe schools, and a year of tax peace to give back breath and hope to families and businesses,” Salvini said. “This isn’t the government that can escort Italy out of this disaster.”

The leader of a main coalition partner, the Democratic Party, pushed for a fresh mandate for Conte, who despite the euro-skepticism of the 5-Stars, has lately been professing staunch support for the European Union, in an apparent bid to woo centrist lawmakers now in the opposition.

The Democrats' leader, Nicola Zingaretti, rooted in a tweet for a new Conte government that would be “clearly pro-Europe and backed by a wide parliamentary base that would guarantee credibility and stability to face the great challenges that Italy has before it.”

But analysts saw Conte's support from his own coalition as fluid.

But, “the bottom line is that Italy will continue to be governed by an executive that is not apt for the tough job ahead, just as it has been the case since the last election” in 2018, Piccoli wrote in a statement.