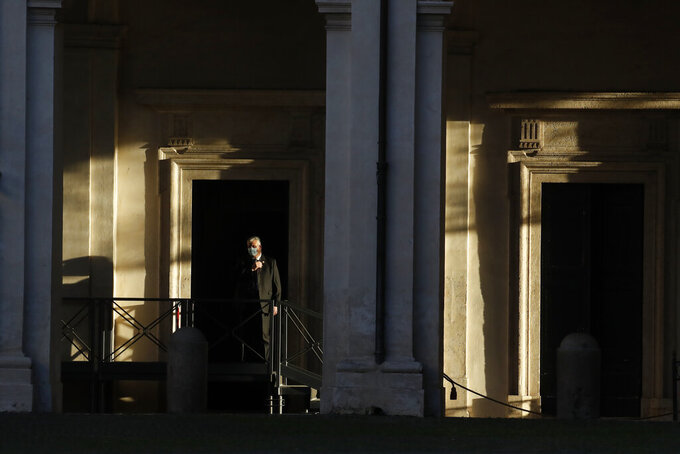 A man stands by the Quirinale presidential palace in Rome, Wednesday, Jan. 27, 2021. Italian Premier Giuseppe Conte resigned after a key coalition ally pulled his party's support over Conte's handling of the coronavirus pandemic, setting the stage for consultations this week to determine if he can form a third government. (AP Photo/Alessandra Tarantino)

Sergio Mattarella met in Rome with the speakers of both houses of parliament on the first day of meetings.

“We are all working for the good of the country,″ Roberto Fico, speaker of the lower house and a member of the governing 5-Star Movement, said as he left the consultations.

The more critical talks are scheduled for Thursday, when Mattarella meets with former Premier Matteo Renzi — who leads the tiny party that triggered the crisis — and Friday, when he sees three right-wing opposition leaders who are seeking new elections.

Mattarella also meets Thursday with the Democratic Party (PD) and on Friday with the 5-Star Movement, the two most important members of the coalition, both of which continue to back Conte.

“We are a facing a very tight passage,’’ PD leader Nicola Zingaretti told reporters, labeling Renzi “irresponsible” for opening a political crisis amid the pandemic and the resulting economic and social woes.

Renzi defended the timing. “It is exactly now that the future of the country is in play,” he said in a Facebook video. “Either we resolve the open questions now, or condemn our children and grandchildren to live in total decline.”

On Wednesday, independent lawmakers formed a new parliamentary group, dubbed the Europeanists, that pledged its support for Conte. But the numbers are still not enough to guarantee him a secure majority after Renzi yanked the backing of his small Italia Viva (Italy Alive) party.

Conte has been working to get the support of independent lawmakers and independent-minded members of the right, in particular Silvio Berlusconi’s Forza Italia.

If he fails, Mattarella could tap another politician from the same coalition to try and form a government. Most political observers believe new elections are only a remote possibility, due both to the pandemic and to the governing parties’ fear of potential right-wing gains at the polls.

Conte has been premier since indecisive 2018 elections led to a coalition government between the 5-Star Movement and the right-wing League. That fell apart when League leader Matteo Salvini made a failed power grab, and Conte was able to form a second government with the left-wing PD.

Renzi took aim at Conte over his handling of the coronavirus crisis, namely a repeated failure to consult parliament on measures and a move to take full control of the plan for distributing billions in EU recovery funds, key to relaunching Italy’s pandemic-ravaged economy.

“I think he wants to get rid of Mr. Conte, who is considered by many, not just Renzi but also by other people in the PD and the 5-Stars, a political threat because of his popularity,’’ said Roberto D’Alimonte, a political science professor at Rome’s LUISS University.

“This is plan A. Plan B is that Renzi wants to get greater visibility, greater weight, for his party.”

Paolo Santalucia contributed to the report.