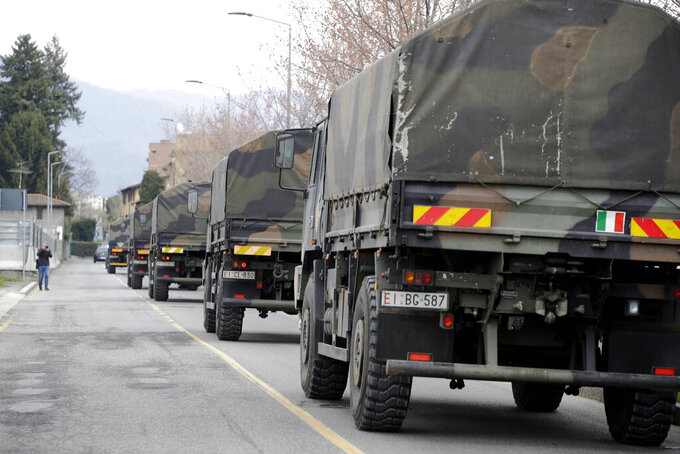 FILE - In this March 26, 2020 file photo, military trucks moving coffins of deceased people leave the cemetery of Bergamo, one of the areas worst hit by the coronavirus infection, on their way to a crematory in some other location as the local crematory exceeded its maximum capacity. Italy marked the anniversary of one of the most haunting moments of its COVID-19 emergency, when Bergamo’s death toll reached such heights that an army convoy had to transport the dead out because its cemeteries and crematoria were full. (AP Photo/Luca Bruno)

ROME (AP) — Italy inaugurated a living monument to its COVID-19 dead Thursday as it marked the anniversary of one of the most haunting moments of the pandemic: when Bergamo’s death toll reached such heights that an army convoy had to transport coffins out because its cemeteries and crematoriums were full.

Premier Mario Draghi visited the northern city on Thursday to commemorate a national day of mourning for Italy’s coronavirus victims. Flags flew at half-staff around the country and public authorities observed a minute of silence.

Draghi laid a wreath at Bergamo's cemetery and inaugurated a forest named in honor of the more than 100,000 victims in Italy, the first country in the West to be hit by the outbreak.

“This wood doesn't only contain only the memory of the many victims," Draghi said. “This place is a symbol of the pain of an entire nation."

At the Wood of Memory, Bergamo Mayor Giorgio Gori said the city had decided against a memorial or a piece of artwork to commemorate its dead.

“We decided to honor victims with a work that is alive, with a monument that breathes," he told the handful of dignitaries gathered on a windy lawn surrounded by the first 100 freshly planted saplings.

The anniversary came as much of Italy including Bergamo is under new lockdown, with schools, shops and restaurants shuttered, amid a new surge of infections blamed on variants. And it comes as Italy’s halting vaccination campaign has slowed down further because of the temporary suspension of AstraZeneca shots.

Footage of the army convoy snaking its way through Bergamo’s roads on March 18, 2020 remains one of the most heart-wrenching and iconic images of the pandemic, in a year that saw many. It joined the photo of an exhausted Cremona nurse collapsed on her computer keyboard after a shift, and more recently, an image of a dejected Rome-area bistro owner sitting hunched over in her restaurant kitchen after the latest lockdown was imposed.

For Bergamo, though, the army convoy was early evidence of the outsized toll the first weeks of the outbreak had on what would become the hardest-hit province in the hardest-hit region of Lombardy: By March 18, 2020, Italy had recorded 2,978 deaths — nearly 2,000 of them in Lombardy.

By the end of March, the province of Bergamo had registered a 571% increase in deaths compared with the five-year monthly average — the biggest increase in Italy and one of the biggest localized increases in mortality rate in Europe.

Today, Italy’s official toll stands at more than 103,000 — the sixth highest in the world and the second highest in Europe after Britain — with hundreds more dying every day, amid continuing questions about what has gone wrong with Italy's response, particularly in Lombardy.

Gori said Thursday that at least 670 people died in Bergamo city alone, and more than 6,000 in the surrounding Bergamo province. But he noted that only half of them feature into Italy's official toll since they were never tested for the virus because of early laboratory limitations, and died at home or in nursing homes.

On hand for the commemoration was Luca Fusco, whose father died early in the outbreak and who launched a Facebook group “We Will Denounce” to allow other mourning families a forum to remember their loved ones since funerals weren’t allowed during the first wave.

In a post, Fusco said he was bringing to the ceremony the memories of the Bergamo dead and “that great book of painful stories, tears and emotion and also the sharing and consolation that is our Facebook group."

Some of those testimonies became the founding pieces of evidence in a criminal investigation launched by Bergamo prosecutors into whether to lay any criminal blame for Bergamo's toll, and whether a lack of pandemic preparedness had any role in it.

Separately, a group of 500 families have launched a class-action lawsuit against the Lombardy regional government and health ministry. In a statement, the lawyers heading up the initiative denounced that some of the dignitaries present at Thursday's ceremony opposed or delayed an early lockdown in Bergamo and then tried to insist that what later transpired was just tragic fate.

“Today remembering the dead would mean pointing out that what happened was just the opposite of that fate," the lawyers said.