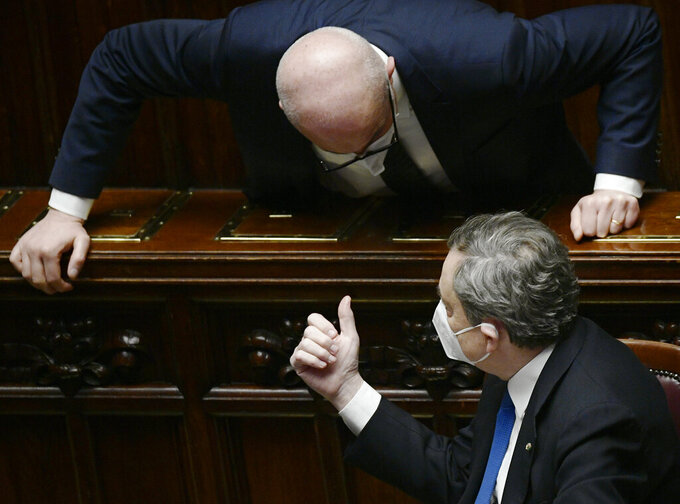 Italy's Prime Minister Mario Draghi talks with Italy's Minister for Parliamentary Relations, Federico D'Inca, as he attends a lower Chamber session in the Italian Parliament, Thursday, Feb. 18, 2021, ahead of a confidence vote that would mark the start of his government. (Filippo Monteforte/Pool photo via AP) 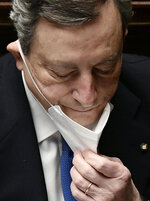 ROME (AP) — Italy’s 5-Star Movement said Thursday that 15 of its senators will be expelled from the party after they voted “no” in a confidence vote for Premier Mario Draghi’s newly formed government.

The expulsions illustrated how Draghi’s appointment has badly split the 5-Star Movement, which was created as a grass-roots, anti-establishment protest force opposed to the pro-European banking establishment that the new premier represents to many members. Draghi, 73, is former president of the European Central Bank and served as the Bank of Italy's governor.

The movement, the biggest vote-getter in Italy's 2018 general election, nevertheless decided to back Draghi out of a sense of national responsibility, given the crisis posed by the coronavirus pandemic and resulting economic devastation.

In a statement on the 5-Star Facebook page, party leader Vito Crimi said the 15 senators who dissented from the party line would be expelled but acknowledged the 5-Stars backed a Draghi-led government reluctantly. More 5-Star lawmakers faced a similar fate after the lower Chamber of Deputies followed the Senate and voted overwhelmingly late Thursday to back Draghi’s Cabinet, voting 535-56 with five abstentions.

According to 5-Star Movement regulations, lawmakers can be expelled if they vote contrary to the positions of the party's registered members, who are given a say on individual proposals via an online platform that is the hallmark of the 5-Stars’ brand of “direct democracy.”

In a membership vote last week, 59% of 5-Stars supported Draghi, swayed in part by his plans to emphasize environmentally sustainable growth policies.

President Sergio Mattarella asked Draghi, 73, to form a government after a small party yanked its support from the 5-Star-led government headed by now-former Premier Giuseppe Conte.

Initially, the 5-Stars refused to back Draghi, enraged that a power play had toppled Conte, plunged the country into a government crisis and resulted in a technocrat being appointed premier outside of the normal election process.

Draghi put together a broad-based government of unity that has ministers from the 5-Stars, center-right and left parties, as well as technocrats leading key ministries.

His government easily won its first confidence vote late Wednesday, when senators voted 262-40 with two abstentions in favor of his Cabinet . Joining the 15 5-Star defectors in both houses of Parliament were members of the right-wing Brothers of Italy party.