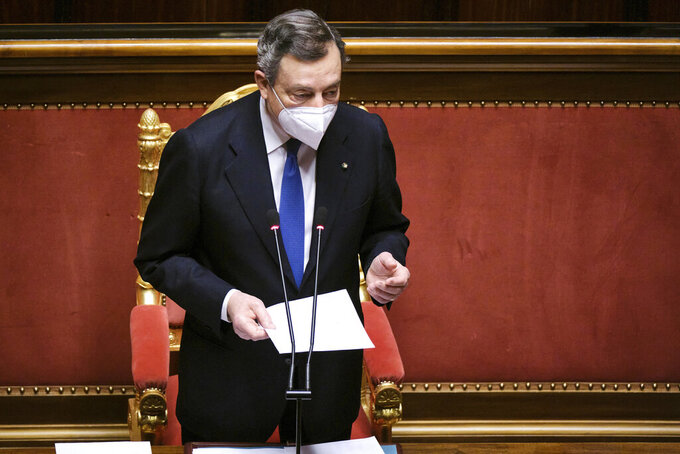 Italian Premier Mario Draghi wears a face mask to curb the spread of COVID-19 as he addresses the Senate ahead of the European Council of March 25-26, in Rome, Wednesday, March 24, 2021. Draghi on Wednesday decried that various interest groups are getting their members COVID-19 vaccines before adults older than 80 receive the shots. (Mauro Scrobogna/LaPresse via AP)

ROME (AP) — Italian Premier Mario Draghi on Wednesday decried that various interest groups are getting their members COVID-19 vaccines before people older than 80 receive the shots.

In a speech to Italy's Senate, Draghi complained that not all the nation’s regions are following the Health Ministry’s directives that gives vaccine priority to older age groups.

“Some (regions) are neglecting their elderly in favor of groups that proclaim priority, probably on the basis of some contractual influence,'' Draghi said. ”We must be united in emerging form the pandemic, just as we have suffered it together in the preceding months."

Italy's regions largely wield autonomy in how health care is delivered to their residents. Many have designated categories of workers or professional associations to get priority in signing up for shots.

In the tiny southern region of Molise, journalists are a priority group. Lawyers have priority in Sicily, whether or not their work takes them into courtrooms or leaves them alone in offices.

Older citizens and their adult children have taken to complaining, some by calling in to radio shows, about individuals in their late 80s and 90s who haven't been able to get vaccinated while, say, university professors whose classrooms are unlikely to open anytime soon due to COVID-19 restrictions have received jabs.

Many such laments of injustice have come from Italy's Lombardy region, which has suffered the most pandemic deaths in the country by far, as well as from Tuscany.

In Italy, 23% of the population is 65 or older, making it the world's second-oldest country. By Wednesday, roughly 2.5 million of the nation's 4.3 people residents older than 80 had received at least one shot of a COVID-19 vaccine.

Draghi took to task the uneven quality of Italy’s vaccine rollout. “As far as vaccine coverage goes for those older than 80, unfortunately there persists major regional differences that are very difficult to accept,″ the premier said.

The ISPI political research think tank has calculated that the mortality rate in Italy would have dropped by nearly 40% in the first months of the year had the vaccination campaign concentrated on the over-80 population. Instead it dropped by just 10% as Italy, with Europe's second-highest death toll in the pandemic, has reported a few hundred virus-related deaths every day for weeks now.

Private La7 TV and Italian daily Corriere della Sera, on the basis of that research, concluded that concentrating the vaccines on the over-80 bracket could have saved 1,700 lives instead of 600.

Draghi did sound some positive notes in his speech, which came ahead of a meeting of European Union leaders to discuss the EU's progress in vaccinations. The pace of shots in the EU generally has been slow-moving compared to Britain and the United States.

Draghi told the lawmakers that 86% of care home residents have received at least one vaccine dose, and two-thirds of them are fully vaccinated against COVID-19.

Italy's vaccine program essentially got going in early January, starting with health care workers and nursing home residents. Next in line, at least according to the government's directives, were supposed to be those older than 80, as well as school personnel and police and military members.

With much of Italy in the so-called "red zone,'' which carries the strictest infection-prevention measures for schools, business activities and travel, Draghi offered a glimmer of hope.

“We are watching carefully the data on contagion, but if the epidemiological situation allows it, we will start reopening the schools first” ahead of other activities, Draghi said.