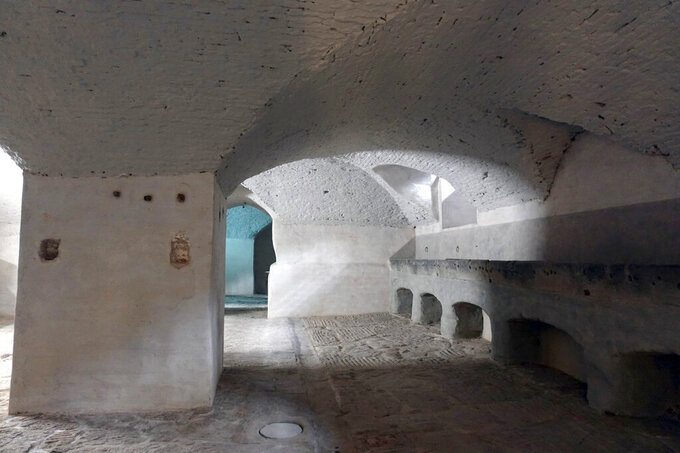 In this photo made available Thursday, April 22, 2021, the underground area of the Uffizi Gallery is seen after renovation works, in Florence, Italy, Friday, April 16, 2021 . Recently discovered frescoes and new rooms filled with statuary will give visitors “a glorious introduction” Florence’s Uffizi Galleries when the museum reopens after months of COVID closure. Starting with the reopening, visitors will enter the museum from the west wing, facing the Arno River, where workers restoring galleries have discovered hidden beneath plaster and on ceilings frescoes dating from the 17th and 18th centuries. (Uffizi Gallery via AP)

MILAN (AP) — The Uffizi Gallery in Florence used the winter COVID shutdown to push ahead with renovations, discovering lost frescoes that will greet visitors when the leading repository of Italian Renaissance art reopens on May 4.

Uffizi director Eike Schmidt said the six months of closure were put to good use: renovating 14 new rooms that will open to the public next month, and discovering frescoes that would otherwise have remained hidden.

But he hopes that the most recent reopening — the third during the pandemic — will be the last.

“We very much hope that now we will be able to open stably and without further closures. We hope so for the museum, but we hope it also for the world and for human society,″ Schmidt said.

The previously hidden frescoes include a life-size figure of a young Cosimo II de Medici — part of the Renaissance family that commissioned the Uffizi — dating from the 1600s, as well as decorative plant motifs from the 1700s on the walls and ceiling of nearby rooms.

They are located in the museum's west wing, which is where the new visitors' entrance will be when the Uffizi reopens.

Schmidt said the new entrance facing the Arno River would provide “a glorious introduction” for visitors. Classic statuary will be added to the entrance in the future.

Workers also completed restoration on new rooms dedicated to 16th Century high and late Renaissance art from central and northern Italy, beyond Tuscany. They complete the sweep through art history from the Middle Ages with Giotto, to the Renaissance masters Botticelli, Raphael and Michelangelo, beyond to the counter-reformation and Venetian galleries.

"You can now seamlessly walk through, or hike through, art history if you wish to do so,'' Schmidt said.

Under the Uffizi's new entry system, visitors will buy tickets, deposit coats and bags in the west wing and cross through a courtyard to the east wing, where they will pass through metal detectors and pick up audio guides before starting their rounds of the museum.

The number of visitors at the museum last year dropped to about a quarter of those in 2019 due to the COVID lockdowns in the spring and fall, with some 1.2 million people visiting in 2020, down from 4.4 million a year earlier.

Booking requests have already started coming in for the summer months, which the museum will be able to satisfy now that an opening date is official, Schmidt said.

With prospects for the resumption of international tourism only beginning to come into focus, Schmidt expects the gallery will operate at about half its capacity for the foreseeable future. Pre-pandemic, peak visitation reached as many as 12,000 people a day.

“Actually to visit the museum now and over the next few months will mean you will really feel even more as if you are part of the de Medici family,’’ Eike said. “Especially if you come in the early morning, you might be in the Botticelli room to yourself for two or three minutes before someone else arrives. That never, ever happens.”

The Uffizi has been closed since Nov. 5 except for two weeks in January when Tuscany was under Italy's lowest level of restrictions. Italy on Monday begins a gradual reopening. Along with museums being allowed to open their doors, restaurants in low-risk zones on Monday will be allowed to offer outdoor dining before a 10 p.m. curfew.