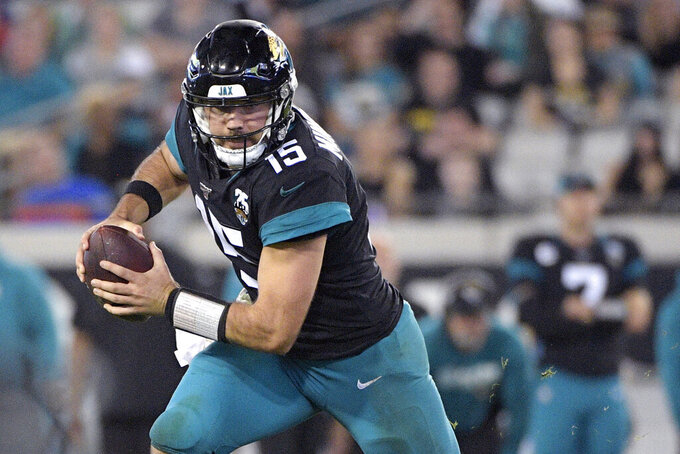 FILE - In this Dec. 29, 2019, file photo, Jacksonville Jaguars quarterback Gardner Minshew II (15) rolls out to throw a pass during the second half of an NFL football game against the Indianapolis Colts Sunday,, in Jacksonville, Fla. Minshew was ready for Jacksonville’s “first day of school.” Then Minshew got a call saying he had been in close contact with a teammate who tested positive for the coronavirus and would be forced to quarantine for two days. (AP Photo/Phelan M. Ebenhack, File)

“Had my outfit picked out and everything,” he quipped.

Then Minshew got a call saying he had been in close contact with a teammate who tested positive for the coronavirus and would be forced to quarantine for two days.

“It was brutal, dude,” Minshew said during a Microsoft Teams call with reporters Tuesday. “Had to stay at home. That sucks. Missed out on playing with all my friends. But, yeah, did not contract the virus. Took one look at me, ran the other way. It was probably in its interest.”

Minshew was placed on the COVID-19 list Sunday along with three teammates, including close friends and former roommates Michael Walker and Andrew Wingard. Minshew and Wingard were cleared Tuesday morning after they received the second of two negative tests. Walker remains on the list.

Minshew, Walker and Wingard were roommates as rookies last year. They recently decided to move out, parting ways in the interest of safety.

“You just can’t afford to be around somebody, even if you’re not going to contract it,” Minshew said. “You can’t afford sitting out those couple days, so we’re just all going to ride it out solo this year.

“It’s a good thing that it happened. We realized what could happen, what could go wrong if one of us failed a test. We all agreed this was best for us.”

Minshew and Walker, however, lived together in Naples while working out in the offseason. Minshew believes they contracted the coronavirus during that time because both tested positive for COVID-19 antibodies as they reported for training camp.

“We probably got it at the same time, had no symptoms or whatever,” Minshew said. “I think he failed a test, but I don’t think he has it again. But just since he failed (a test) and I was around him then I had to sit out, too.

“It just shows kind of the fragility of this whole thing and how fickle this thing can be. Just being around somebody, if they touch enough people, you can shut down the whole team really quick.”

Jacksonville had a league-high 12 players land on the COVID-19 list over the past two weeks, with most of them being rookies and second-year players. Jaguars coach Doug Marrone had no explanation for those results other than saying the team is taking an ultra-cautious approach.

“We are not trying to keep it a secret. It’s not an advantage,” Marrone said. “I think a lot of teams may be doing things differently. I think those are all things that will at least make you think, maybe people will come up with things that are beneficial for everyone. I think right now there is really not a lot of secrets and everyone is sharing that because we are just trying to do the best thing for the support staff, the coaches and the players.”

Minshew said players are still figuring out what it’s takes to stay safe, especially because they are outside the facility for part of every day.

“I told all the guys we have a responsibility to each other and each other’s families to be safe,” Minshew said. “Sometimes it’s not fun, sometimes it’s not what you want to do, but it’s what we need to do to be able to have this season and win the games like we want to win them.”

The Jaguars are expected to hold their first training camp practice next Wednesday.