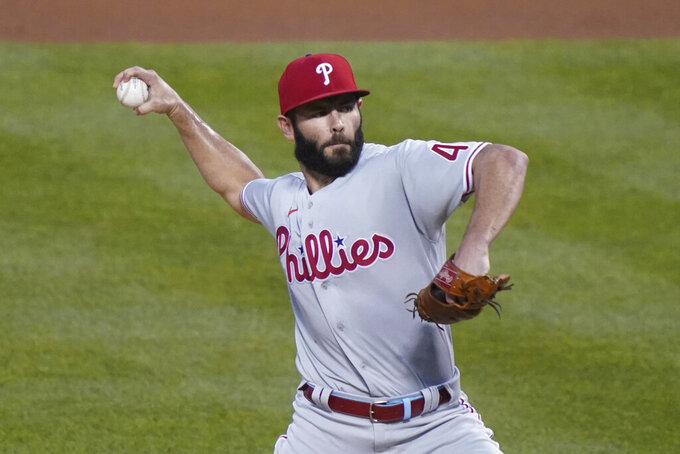 FILE - In this Sept. 4, 2020, file photo, Philadelphia Phillies starting pitcher Jake Arrieta throws in the first inning of a baseball game against the New York Mets in New York. Arrieta is returning to the Chicago Cubs, agreeing to a $6 million, one-year contract on Friday, Feb. 12, 2021. Arrieta can earn $1 million in performance bonuses, according to a person familiar with the situation who confirmed the deal on condition of anonymity because it is pending a physical. (AP Photo/John Minchillo, File)

If his second tenure goes anything like that, they sure would take it.

Arrieta returned to the Chicago Cubs, finalizing a $6 million, one-year contract on Wednesday.

Chicago also agreed to to contracts with veteran relievers Brandon Workman and Pedro Strop, people familiar with the deals said.

“I got to talk to the pitchers today,” Ross said. “Just staring into that group and then locking eyes with him, it was a nice sight from the manager's seat, that's for sure.”

While the reunion is a feel-good story for the reigning NL Central champions after a tough winter, Arrieta hasn’t experienced the same level of success since he left Chicago after the 2017 season.

The 6-foot-4 right-hander signed a $75 million, three-year contract with Philadelphia as a free agent and went 22-23 with a 4.36 ERA in 64 starts with the Phillies. He had a 4-4 record and a 5.08 ERA in nine starts last year during the pandemic-shortened season.

Arrieta rejoined a team with a new-look rotation after the Cubs traded Yu Darvish to San Diego in December and let Jon Lester depart for Washington in free agency. Arrieta also reunited with David Ross, who caught the second of Arrieta’s two no-hitters and guided Chicago into the playoffs last year in his first season as a big league manager.

“I think Jake feels like he has something to prove,” Ross said. “I think he is really comfortable here in his Cubs uniform and has got a longstanding history. I've watched him perform at his best. I know him, he's trying to get back to that version — or as close as he can to that.”

The Cubs had been looking for pitching depth, concerned about how many starters they might need going from last year’s abbreviated season to a more regular schedule in 2021. Kyle Hendricks and Zach Davies lead the rotation, with Alec Mills, Trevor Williams, Adbert Alzolay and Arrieta also in the mix.

Arrieta was first acquired by Chicago along with Strop in a July 2013 trade with Baltimore, a key move in the franchise’s rise from the bottom of the NL Central to one of the majors’ best teams.

Arrieta also performed well in the playoffs during his first stint with Chicago. He tossed a five-hitter in the Cubs’ 4-0 win at Pittsburgh in the 2015 NL wild-card game. He won each of his two World Series starts at Cleveland in 2016, compiling a 2.38 ERA in 11 1/3 innings.

Workman received a $1 million, one-year deal, according to a person familiar with the contract who spoke to The Associated Press on condition of anonymity because the move had not been announced. The 32-year-old right-hander can earn an additional $2 million in bonuses.

The 35-year-old Strop returned to the Cubs on a minor league deal that includes an invite to big league spring training, according to a second person familiar with the contract who spoke on condition of anonymity because the move had not been announced. The deal includes a March 30 opt-out date.