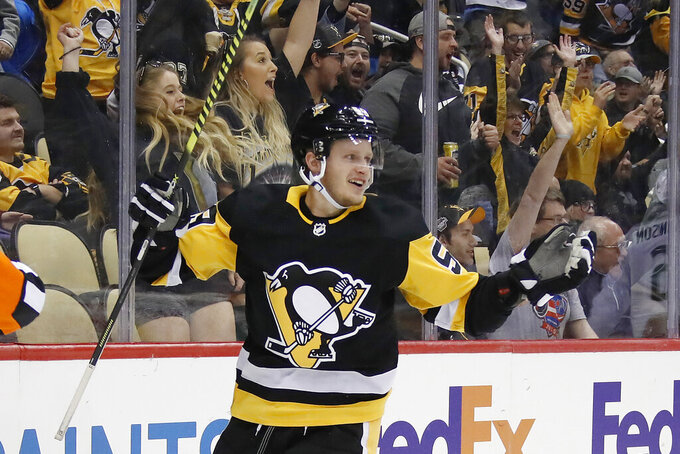 FILE - In this Oct. 16, 2019, file photo, Pittsburgh Penguins' Jake Guentzel celebrates after scoring during the second period of an NHL hockey game against the Colorado Avalanche in Pittsburgh. Guentzel feared his season was over thanks to a shoulder injury in December. The "pause" caused by the pandemic has given him renewed optimism that he will be ready when the playoffs hopefully being this summer. (AP Photo/Gene J. Puskar, File)

The Penguins All-Star forward has joined a handful of teammates on the ice as part of Phase 2 of the NHL's Return to Play program and figures to be ready when Pittsburgh faces Montreal in the opening round of the playoffs sometime this summer.

Guentzel's breakout year appeared to be over when he took an awkward spill on Dec. 30 following his 20th goal of the season. He crashed into the end boards a split-second after collecting his 200th career point when he accidentally tripped over the stick of Senators defenseman Thomas Chabot.

The 25-year-old — whose play during the opening months kept Pittsburgh afloat amid myriad injuries to high-profile players — clutched his side as he skated to the bench and underwent surgery the following day. With his rehab expected to last until late April or early May, Guentzel feared he might not be back until 2020-21.

Then came the COVID-19 pandemic, forcing the NHL to pause its season in mid-March and giving Guentzel an unexpected window to return.

“Not sure what would have happened if the season would have played out,” Guentzel said Wednesday.

Under normal conditions, Guentzel would have needed the Penguins to advance at least one round and maybe two in the playoffs if he wanted to have a shot at rejoining the club. This season, however, has been anything but normal.

The team Guentzel returns to could look a bit like the one that defeated Nashville in six games in the finals three years ago. During Guentzel's absence, the team brought back winger Conor Sheary, who played on the “Sid and the Kids” line in the 2016-17 season.

“We feed off each other, we know each other,” Guentzel said. "If we have that opportunity, hopefully we have time to get that chemistry back.”

There's still a long way to go to get to that point. Then again, the fact that it's even on the table for Guentzel is promising. The joy of being named to the All-Star team on Dec. 30 for the first time was replaced hours later by pain and doubt as he skated to the bench clutching his right shoulder after smacking into the boards.

“You’re not really sure what the severity of the injury is,” Guentzel said. "Just tried to get off the ice and get back to the locker room as fast as I can, because I knew something wasn’t good. In my head it was a blur. It was hard to go through something like that.”

He is still reticent to get into specifics surrounding the nature of the injury, saying only “from what I heard, it was pretty significant" while remaining thankful he was able to get his head and neck out of harm's way before the crash.

While listed at 5-foot-11 and 180 pounds, Guentzel is comfortable putting his body in harm's way against bigger defenders. He is not sure if he'll be hesitant to mix it up whenever contact is allowed.

“It might be there, it’s just hard to think about right now and hard to process,” Guentzel said.

It's hardly the only thing Guentzel is having trouble wrapping his mind around. He grew up in the Minneapolis suburbs. The death of George Floyd at the hands of white police officers last month — and the ensuing wave of protests and call for change in the aftermath — has been eye-opening for a player who is typically economical with his words, preferring his actions to do the talking for him.

Not so much anymore. He called the manner of Floyd's death “disturbing."

“My eyes have definitely been open and I'm definitely committed to educating myself and making a difference out there,” Guentzel said.

It's not the only area in which Guentzel and the rest of the NHL are getting an education. The league is trying to be pragmatic about its health protocols as it attempts to resume the season. Still, there are several issues that need to be settled. And for players whose mental and physical health rely so heavily on routine, there remains a sense of wariness about what lies ahead.

“It’s hard for us to not know what is going on with all this unknown of this COVID," Guentzel said. "I think we’re all a little on edge as to what is going to happen.”