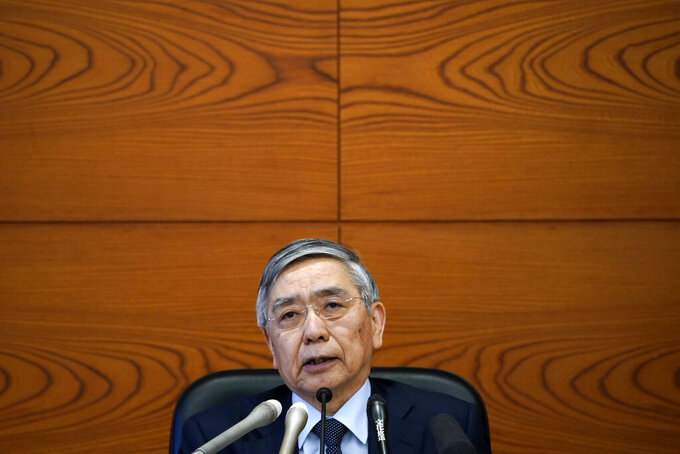 FILE - In this March 16, 2020, filer photo, Bank of Japan Gov. Haruhiko Kuroda speaks during a news conference in Tokyo. Japan’s central bank on Monday, April 27, 2020, announced it is making it easier for cash-strapped companies to get funding in response to the growing economic damage from the coronavirus pandemic. (AP Photo/Eugene Hoshiko, File)

TOKYO (AP) — Japan’s central bank is making it easier for cash-strapped companies to get funding in response to the growing economic devastation from the coronavirus pandemic.

The Bank of Japan decided at a meeting Monday to ease monetary policy, including expanding the purchase of commercial papers and corporate bonds, which work to deliver cash to companies.

Its latest steps are similar to what central banks around the world are doing to curtail the massive damage the outbreak is unleashing on company profits and business activity.

“Japan’s economy has been in an increasingly severe situation due to the impact of the spread of the coronavirus at home and abroad,” the Bank of Japan said in a statement.

Additional monetary easing may be needed, and the central bank was closely monitoring the situation, it said.

The bank issued a separate statement reiterating that the economy was in a serious state but was expected to improve once the impact from the pandemic declines. It also warned much remains unclear.

Japan has reported about 13,000 coronavirus cases so far, and fewer than 400 deaths. As is true elsewhere, the number of confirmed cases is thought to understate the actual number of those who may have been infected.

Restaurants, concerts and other events have closed, and tourism is practically at a standstill. Auto factories have suspended production and people are being asked to work from home and stay home.

Japan’s economy, the world’s third largest, is dependent on exports, centered around products like cars and electronics goods.

But it’s also driven by small and medium size businesses, which analysts say are at major risk from the social distancing restrictions aimed at curbing the spread of the coronavirus.

The economy contracted at a 7.1% annual rate during the October-December period and is thought to be already in a recession, though data for the full first quarter of this year have not yet been released.