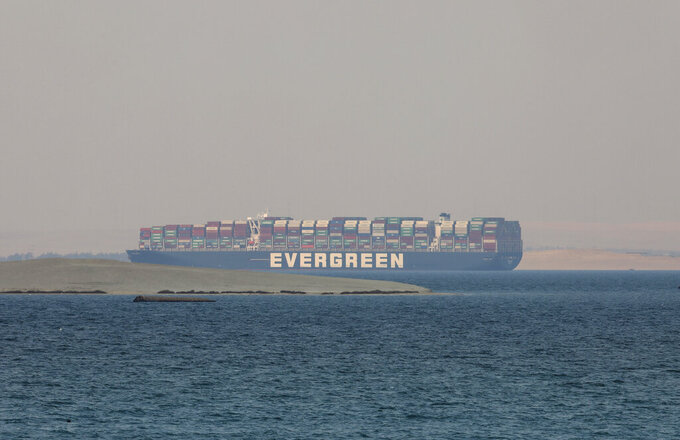 FILE - In this March 30, 2021 file photo, the Ever Given, a Panama-flagged cargo ship, is seen in Egypt's Great Bitter Lake. The Japanese owner of the massive container ship that blocked the Suez Canal for nearly a week, halting billions of dollars in maritime commerce, is asking owners of the freight it is carrying to share the cost of the damages demanded by Egyptian authorities.(AP Photo/Mohamed Elshahed, File)

TOKYO (AP) — The Japanese owner of a massive container ship that blocked the Suez Canal for nearly a week, halting billions of dollars in maritime commerce, is asking owners of the freight it is carrying to share the cost of the damages demanded by Egyptian authorities.

Shoei Kisen Kaisha Ltd. said Friday that it has asked freight owners to share the damages in a deal known as a general average declaration. The damage sharing scheme is often used in maritime accidents covered by insurance. The company said it has notified a number of the owners of the approximately 18,000 containers on the ship to assume part of the damages demand, estimated at about $916 million.

The shipowner said earlier this month that it has been negotiating with Egyptian authorities over the compensation demand. The ship, the Ever Given, is being held at Great Bitter Lake, a wide stretch of water halfway between the north and south ends of the canal, for inspection and won’t be allowed to leave until the settlement is reached, Shoei Kisen said.

The company refused to disclose further details of the negotiations, including the amount covered by insurance and how much it is asking freight owners to share.

The Ever Given was on its way to the Dutch port of Rotterdam on March 23 when it slammed into the bank of a single-lane stretch of the canal about 6 kilometers (3.7 miles) north of the southern entrance, near the city of Suez.

A massive salvage effort by a flotilla of tugboats helped by the tides freed the skyscraper-sized, Panama-flagged and Japanese-owned Ever Given six days later, ending the crisis and allowing hundreds of waiting ships to pass through the canal.

The ship's 25 Indian crewmembers who are still on board are all in good health, the company said.

The ship has enough food, including fresh fruit and vegetables, and drinking water, the ship’s technical management company, Bernhard Schulte Shipmanagement, said in a statement Thursday.

The blockage of the canal forced some ships to take the long alternate route around the Cape of Good Hope at Africa’s southern tip, requiring additional fuel and other costs.. Hundreds of other ships waited in place for the blockage to end.

The shutdown, which raised worries of supply shortages and rising costs for consumers, added to strain on the shipping industry, already under pressure from the coronavirus pandemic.