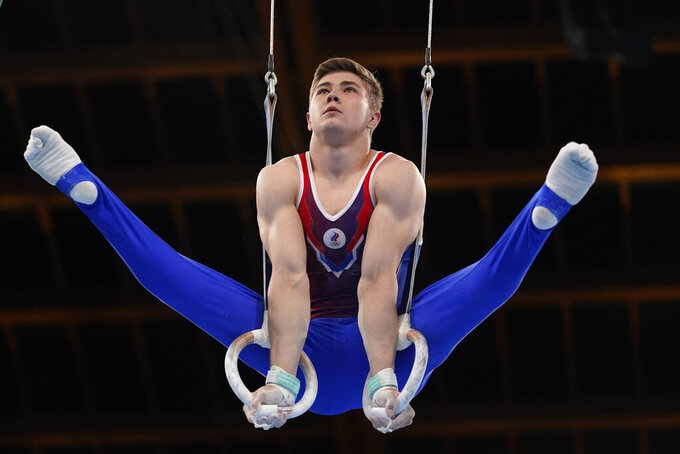 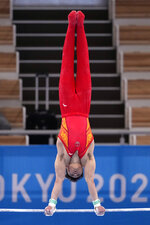 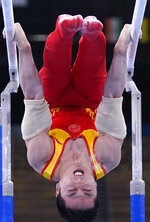 TOKYO (AP) — Kohei Uchimura's gymnastics career is nearly over. The Japanese star can take solace knowing that the sport the two-time Olympic champion led to glory appears to be in good hands in his home country.

Daiki Hashimoto topped Olympic qualifying on Saturday, putting on a show inside the largely empty Ariake Gymnastics Centre to help Japan sprint to the top of the leaderboard.

Hashimoto's all-around total of 88.531 pushed Japan past rivals China and ROC, as the Russian team is known, to the top spot in qualifying. The Japanese will bid Monday night for an Olympic title to back up the one they captured in Rio de Janeiro five years ago.

“Passing the qualification round (in first), you know, really (puts pressure on other teams),” Hashimoto said.

The party, however, will go on without Uchimura. Competing as an individual on high bar — his signature event — the 32-year-old widely considered to be the greatest men's gymnast of all time fell midway through his routine and will not advance to event finals later in the Games.

With fans banned, the small crowd of onlookers — most of them coaches and administrators from various countries — gasped as Uchimura fell to the mat. He pulled himself up and completed his routine, sticking his dismount. His score of 13.866 was well outside the top eight cutoff for event finals.

The program Uchimura led to Olympic glory, however, seems to be back in form after ceding the spotlight to China and Russia in recent years. Japan's team total of 262.251 was just ahead of China's 262.061 and ROC's 261.945.

The United States, Great Britain, Switzerland, Germany and Ukraine also advanced to Monday night's final, when the format switches to “three up/three count.” Teams competed four athletes on each event in qualifying, with each team able to drop the lowest score on a given apparatus.

The biggest surprise of the day came from ROC gymnast Artur Dalaloyan. Competing on a surgically repaired Achilles tendon in his left leg, Dalaloyan earned an unlikely spot in the all-around final with a score of 85.597, good enough for sixth overall.

It didn't come easy. The 25-year-old dissolved into tears following his floor exercise routine, overcome by what he's endured since tearing the Achilles during the European Championships in April.

“I couldn’t control my emotions," Dalaloyen said through an interpreter. “There's something that broke inside me."

Dalaloyan's ranking as the second ROC gymnast behind reigning world champion Nikita Nagornyy means he'll compete in the all-around final if his Achilles holds up.

Dalaloyan didn't decide to attempt to qualify for the all-around until meeting with his coaches on Friday.

“I felt strength and power to compete and decided to compete,” he said. “I keep working for 24 hours a day. For me, the Olympic Games is a really high priority. For most sportsmen and people who do (gymnastics), they don't have the chance to be here. It's a once-in-a-lifetime experience.”

Even if the injury prevented him from putting on the show he wanted. His two lowest scores of the day came on his final two events: pommel horse and floor.

“On one side of me, one side was full of joy and confidence,” he said. “I was kind of proud I could make it, I could come to this point and do all the exercises all the way I really wanted to. The other part of me felt disappointment in a sense because I understand I could not do all the exercises perfectly. There was something I probably could have improved. So having these mixed feelings would better describe my emotions.”

Dalaloyan will have a day to rehab before team finals on Monday when the Russian gymnasts will attempt to win their first Olympic title since 2000.

ROC, China and Japan appear to continue their three-way tug-of-war for men's supremacy. Japan triumphed in Rio in 2016. China edged the Russians at the 2018 world championships, with Russia returning the favor a year later.

Nagornyy grabbed the early lead in all-around qualifying, putting together a steady 87.897, just ahead of China's Xiao Ruoteng and Sun Wei before getting passed by Hashimoto during the second subdivision.

"We respect our rivals very much,” Nagornyy said of the rivalry with China. “We made our best effort. We have a lot to do. There are still tasks ahead.”

Five-time Olympian Marian Dragulescu's attempt to reach the vault finals at age 40 ended when he shorted his landing on his first vault. The three-time Olympic medalist finished his international career by completing the “Dragulescu vault” he invented with only a small hop on the landing.

Epke Zonderland of the Netherlands, the 2012 high bar champion, won't reach the final on his signature event after an uncharacteristically sloppy series of connections put him in 10th place after the first subdivision. The 35-year-old arrived in Tokyo dealing with a shoulder injury.