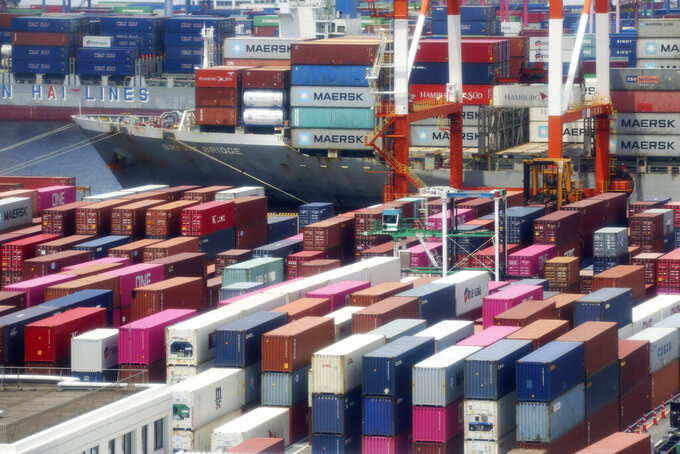 FILE - In this June 17, 2020, file photo, containers are piled up at a port in Yokohama, south of Tokyo. A quarterly survey by the Bank of Japan shows business sentiment has improved sharply with expectations that the economy is recovering from a year-long recession.(AP Photo/Koji Sasahara, File)

A quarterly survey by the Bank of Japan shows business sentiment has improved sharply with expectations that the economy is recovering from a year-long recession.

The BOJ’s “tankan” released Monday reported rebounds in all categories, both manufacturing and nonmanufactuing companies, large and small. It was a marked improvement from the past several quarterly reports as Japan battled the coronavirus pandemic.

In the summer, sentiment plunged to its lowest level in more than a decade as the pandemic crushed exports and tourism, mainstays for the world’s third largest economy.

October's report showed the first improvement in three years after six straight quarters of decline to an 11-year low.

Japan’s economy expanded at a 22.9% annual rate in the last quarter, as businesses and personal spending recovered from the pandemic-related shocks in the spring and early summer that worsened a recession that started in late 2019, even before coronavirus outbreaks hit.

As is true for most major economies, the setback dealt by the pandemic has left Japan still at a lower level of economic output, 3.9% below the level of the last quarter of 2019, according to Capital Economics.

“The survey bolsters our view that Japan will recover quickly once the third wave of coronavirus is brought back under control, with output likely to be back at pre-virus levels in mid-2021," said Capital Economics' Japan economist, Tom Learmouth.