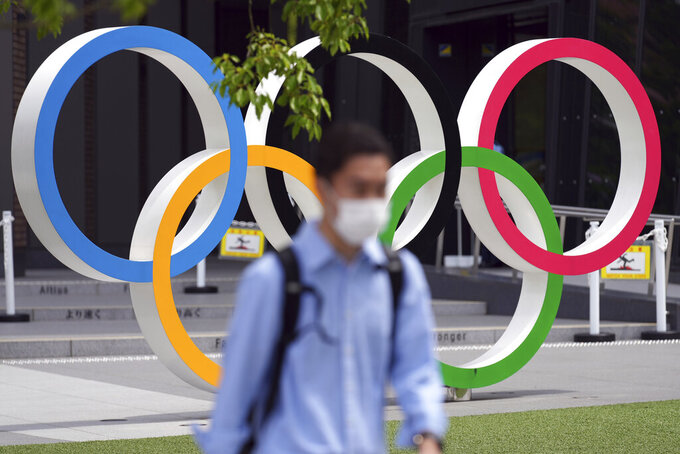 A man wearing a protective mask to help curb the spread of the coronavirus walks near the Olympic Rings Wednesday, June 2, 2021, in Tokyo. (AP Photo/Eugene Hoshiko)

NAIROBI, Kenya (AP) — A Japanese city due to host Kenya’s team for a pre-Olympics training camp has canceled because the coronavirus situation there is “critical,” the Kenyan Olympic committee said Wednesday.

City officials from Kurume in the Fukuoka Prefecture near the southern tip of Japan had informed Kenya on Tuesday that they were canceling, the committee said.

The Kenyan Olympic committee said the letter from Kurume reported that “COVID-19 infections have rapidly spread in Kurume since mid-April and the situation has been recognized as critical.”

The letter from Kurume also stated, according to Kenyan Olympic officials, that “the nationwide spread of infection (in Japan) did not subside even in May, and in Fukuoka Prefecture the number of new infections and the number of hospitalized patients both have reached a record high."

The city told Kenya's team that the sports facilities it had set aside to be used by the visiting athletes for their pre-games preparations had now been turned into vaccination centers.

Kenya's team was due to spend 12 days in Kurume from July 7 to acclimatize before the Tokyo Olympics open on July 23, Olympics Kenya acting secretary general Francis Mutuku said.

“We are living in a situation where we expect things to change at any time and we can only focus on training our athletes for the games and leave other matters to experts outside our field," Mutuku said. “Of course, this was a great opportunity for our athletes to acclimatize and we now have to rely on other plans to get ready for the games."

The news is a blow to Kenya's preparations, but also adds to questions over the International Olympic Committee's determination to go ahead with the Tokyo Olympics, which will draw more than 10,000 athletes and others connected to the games to Japan in the midst of the pandemic. Tokyo is currently under a COVID-19 state of emergency.

“We are working with the assurances we have received that the Olympics will go on, and our athletes are motivated because the Olympics is the biggest event on earth," Mutuku said. "There are some with doubts but we are encouraging them to be ready.”

The head of the Kenyan team said it was “too late” to organize another training camp in Japan before the Olympics.

"We will be advising our teams to continue with preparations locally,” said Waithaka Kioni, the Kenyan team's chief of mission.

Kenya won 13 medals at the 2016 Rio de Janeiro Olympics and finished second behind the United States in the track and field medal count, where it even outshone Jamaica.