Japan's J-League set to resume play in stadiums without fans 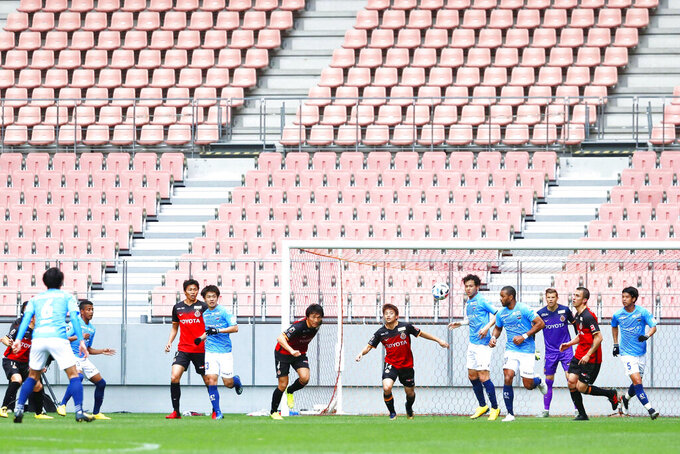 FILE - In this March 28, 2020, file photo, players of Nagoya Grampus and Yokohama FC play during a practice game without spectators following the outbreak of the new coronavirus, in Toyota, central Japan. Japan’s soccer league is back in action this weekend after a four-month delay because of the coronavirus pandemic. The resumption on Saturday, July 4, 2020, comes as Tokyo reported 107 coronavirus cases on Thursday. (Kyodo News via AP, File)

TOKYO (AP) — Japan’s soccer league is back in action this weekend after a four-month delay because of the coronavirus pandemic.

The resumption on Saturday comes as Tokyo reported 107 coronavirus cases on Thursday. It was the largest daily increase reported in two months, and worrying in a country that seems to have kept the virus under check.

The J-League will be like most sports around the world and will play in stadiums without fans because of the pandemic. A key match will feature defending champion Yokohama facing the Urawa Reds.

All 18 teams open play on Saturday. The season was stopped in February after only one round of matches.

“Playing against the reigning champion on the first day of resumption of the season is a great motivation for the team,” Reds coach Tsuyoshi Otsuki said.

“Obviously, it's been a long time between the last game and now," he said. “A lot of training and waiting. The reality is, no one knows how strong anyone is. It’s been such a long time."

The match will be played at the Reds stadium in Saitama, just outside Tokyo.

“Frankly speaking, we, as players, will miss the supporters who will be unable to watch the game in the stadium,” Reds forward Shinzo Koroki said. "So I strongly hope that we will be able to play in a packed stadium again as soon as possible.”

Teruhito Nakagawa, who tied atop the league goal-scoring table last season, said this game is for the fans.

“Soccer fans haven't been able to watch live games since the league went on hiatus in February,”he said. “I truly want our supporters to enjoy tomorrow's game. We have been enjoying playing football, so I hope that feeling will reach the fans.”