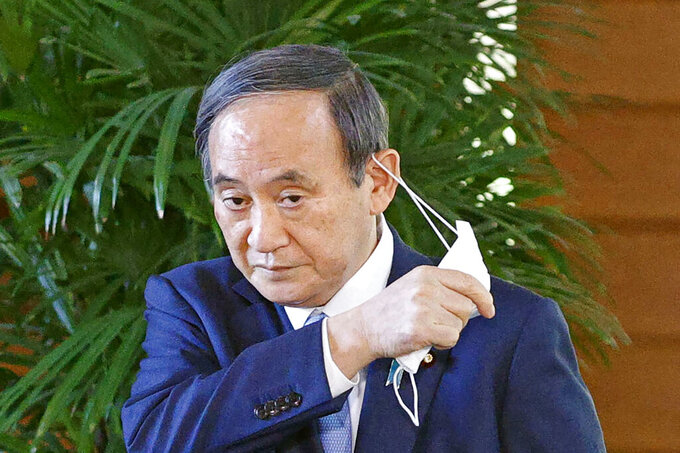 Japanese Prime Minister Yoshihide Suga takes off his face mask before speaking to reporters at his office in Tokyo Monday, April 26, 2021. His ruling Liberal Democratic Party on Sunday lost all three parliamentary by-elections, a blow to Suga’s grip on power ahead of national elections later this year. Suga said Monday he seriously takes the results seen to reflect voter discontent with his government's coronavirus handling as well as scandals involving his party. (Yuta Omori/Kyodo News via AP)

Suga said he takes seriously the results that are seen as reflecting voter discontent with his government's handling of the coronavirus pandemic as well as scandals involving his ruling Liberal Democratic Party.

“I humbly accept the election results as the judgement by the people,” Suga told reporters Monday. (asterisk)We will further examine the results and correct what needs to be corrected."

The votes to fill vacant seats — one in the lower, more powerful, house and two in the the upper house — were the first significant elections since Suga took office in mid-September. Two of the seats were left by ruling party lawmakers who resigned over money-for-favors scandals, and the third had been held by a main opposition lawmaker who died of COVID-19.

The by-elections were considered a major litmus test for Suga, who must call national polls before the Oct. 21 end of the four-year term for the lower house. His term as prime minister also ends on Sept. 30.

Suga had enjoyed high support ratings of around 70% when he replaced Shinzo Abe, who resigned as prime minister because of health reasons after becoming Japan’s longest-serving leader.

But Suga has seen his popularity plunge over a series of money-for-favors scandals by his party lawmakers and criticisms over his handling of pandemic measures and slow progress on vaccinations. Suga has also faced criticisms for pushing for the Olympics amid the pandemic uncertainty.

The seats from Hokkaido, Nagano and Hiroshima were won by candidates backed by the main opposition Constitutional Democratic Party of Japan.

“Voters made a severe verdict on the Suga Cabinet,” said the CDPJ secretary general secretary general Tetsuro Fukuyama. “Voters have become increasingly discontent with scandals of politics and money, and slow responses to the coronavirus."

A leadership change, however, is unlikely since opposition parties are not quite seen as a responsible, viable alternative.