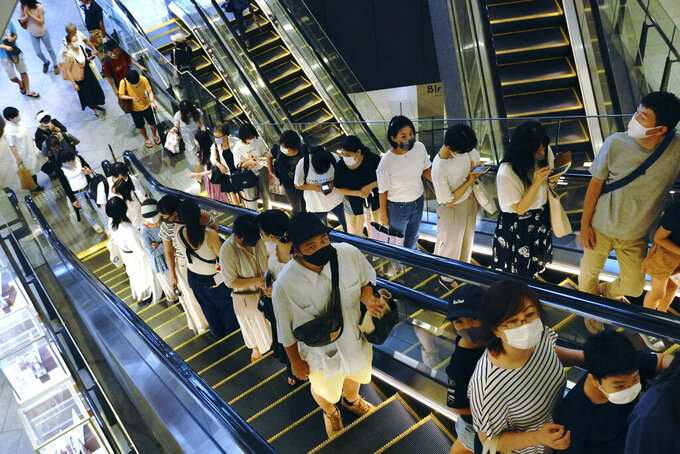 People take elevators at a shopping building in Tokyo on Aug. 24, 2020. Japanese manufacturers’ sentiments improved for the first time in three years, a quarterly Bank of Japan survey showed Thursday, Oct. 1, 2020, as the nation grappled with stagnation worsened by the coronavirus pandemic. (AP Photo/Eugene Hoshiko)

TOKYO (AP) — Japanese manufacturers’ sentiments improved for the first time in three years, a quarterly Bank of Japan survey showed Thursday, as the nation grappled with stagnation worsened by the coronavirus pandemic.

The headline measure for the “tankan,” tracking sentiment among large manufacturers, stood at minus 27, an improvement of seven points from the previous survey that came out in July.

That measure had declined for six quarters straight, to an 11-year low, before Thursday’s report.

Sentiment among large nonmanufacturers improved by five points to minus 12.

Despite some positive signs in the tankan, the numbers are still in the minus range, meaning pessimism is still rampant in Japan Inc. and the world’s third largest economy has a long way to go before it’s on a solid growth track.

Worries also remain about a second wave of COVID-19 infections. Japan has never had a total lockdown, and businesses have been trying to return to normal with mask-wearing and social-distancing measures.

The pandemic has squelched overseas tourism, which had sustained economic activity in recent years.

Although exports have been falling in recent months, there are some signs of a recovery as overseas demand picks up. The Bank of Japan has continued to pump ample cash into the system. The government has doled out cash handouts to encourage consumer spending.