Jarmond faces many challenges in taking over as UCLA's AD 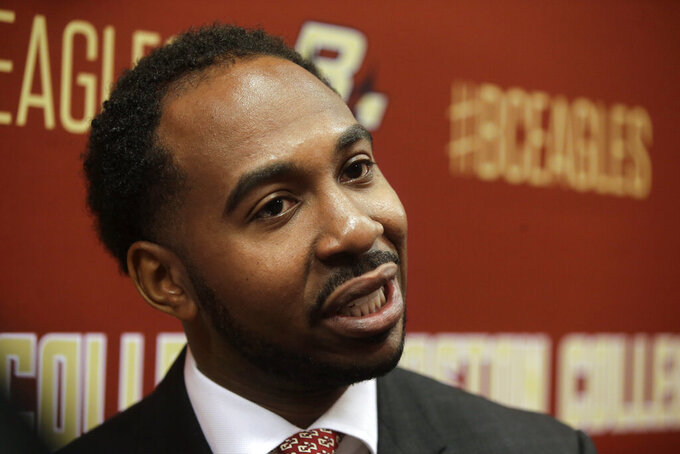 FILE - In this April 24, 2017, file photo, Martin Jarmond, newly hired Boston College athletic director, takes questions from members of the media during a news conference on the schools campus, in Boston. Most new athletic directors that take over in July have the luxury of getting acclimated to their new school before things really ramp up in two months. That is not going to be the case for the start of Jarmond's tenure at UCLA. Jarmond began in Westwood on Wednesday, July 1, 2020, after three years at Boston College. (AP Photo/Steven Senne, File)

LOS ANGELES (AP) — Most new athletic directors who take over in July have the luxury of getting acclimated to their new school before things really ramp up in two months. That isn't going to be the case for the start of Martin Jarmond's tenure at UCLA.

“You would like have something resembling normalcy, but I have to come in and embrace the challenges,” said Jarmond, who officially took the helm on Wednesday. “I'm not the only one going through what is an uncertain time.”

The 39-year old Jarmond was named UCLA’s first Black athletic director in May. He is also the first AD in the program’s 101-year history who has no prior ties to the university. He replaces Dan Guerrero, who led his alma mater for 18 years.

Jarmond, who was hired in Westwood after three years leading Boston College's athletic department, has a lot on his plate. Not only is there trying to navigate 23 teams in 15 sports through the coronavirus pandemic, but there is the added challenge of Under Armour trying to terminate its record apparel contract with the university. The company informed UCLA last week of its intentions.

The two sides are four years into a 15-year deal worth $280 million, which remains the highest in college athletics. Under Armour pays $11 million per year in rights and marketing fees as well as contributing $2 million per year to aid in facility improvements. Under terms of the contract, the company is supposed to supply $6.85 million in athletic apparel, footwear and uniforms.

Jarmond reiterated last week's statement that the matter is being evaluated by the university and its attorneys.

Under Armour cited the team's struggles in its highest profile sports as a reason for ending the partnership. The football program has had a losing record four straight seasons, including a 7-17 mark in Chip Kelly's first two seasons, which has led to declining attendance at the Rose Bowl. Men's basketball struggled the first half of last season but won nine of its last 11 in Mick Cronin's first season.

On-field performance though will eventually rise on Jarmond's list of priorities. His first task is trying to make sure UCLA's teams can return healthy once games begin. The campus started welcoming athletes in football and fall Olympic sports last week, beginning with testing before they could progress to offseason conditioning drills.

The NCAA recently approved a plan allowing for extended football and basketball workouts, but the county has not cleared UCLA for that timeline yet. The university reports that 75 members of the campus community have tested positive, but doesn't specify whether they are athletes. This past week, 18 students and six staff members had positive tests.

When football players expressed concerns about returning to campus two weeks ago, Jarmond met with the team via Zoom to answer questions along with Kelly.

“I thought it was important to make sure everyone was heard, along with trying to show coaches that things can be addressed head on,” Jarmond said. “I think our safety plan is thorough but we can't control the spikes going on throughout the country.”

Jarmond is known as one of the country’s best athletic fundraisers, not only at Boston College but when he worked in the athletic programs at Michigan State and Ohio State. That will be needed at UCLA, which ran an $18.9-million deficit during the 2019 fiscal year. That figure could more than double this year.

Jarmond is still doing most of his work from Boston while trying to relocate to Los Angeles. He was on campus last month for the first time after all of his interviews with the search committee were done remotely due to the pandemic.

In order to find out more from students and supporters, he has launched MJ Listens on the athletic program's website.

“It is critically important to listen and learn from key stakeholders. I have a pretty good idea of where to start but a lot of things will be dictated with what is currently happening,” he said.