Jays players headed to Florida, continue talks to play in TO 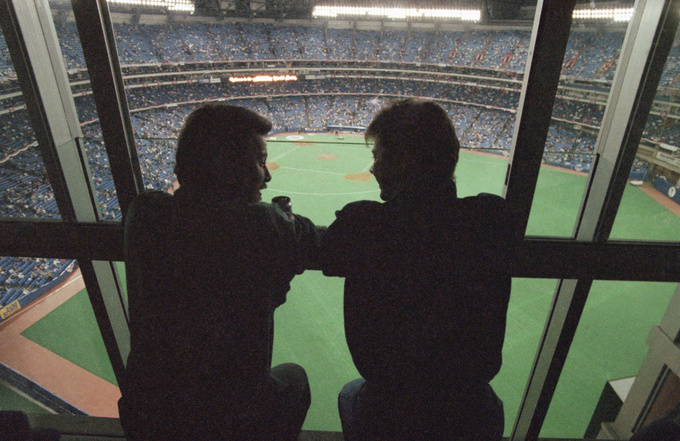 FILE - In this Oct. 22, 1992, file photo, spectators look out at the field of the SkyDome in Toronto, from a window of the SkyDome Hotel before Game 5 of the World Series between the Toronto Blue Jays and the Atlanta Braves. This week, Major League Baseball players and owners reached an agreement to play an abbreviated, 60-game season that would start July 23 or 24 in teams’ home ballparks. But the seats will be empty. Instead, fans hoping to see a game in person will be have to settle for pressing their faces up against hotel windows, squinting through metal grates or climb to rooftops when baseball returns this month in otherwise empty stadiums. (AP Photo/Rusty Kennedy, File)

TORONTO (AP) — The Blue Jays are moving players to their spring training facility in Florida while they await word from the Canadian government about playing in Toronto amid the coronavirus pandemic.

Ontario Premier Doug Ford said Monday that city, provincial and federal authorities “kind of gave their approval,” but the Blue Jays are looking for a letter of support from the federal government.

Ford said he was in talks with Blue Jays President Mark Shapiro all weekend.

The team later issued a statement that said it is starting to move players and personnel to its training facility in Dunedin, Florida, to begin testing players.

“The team will either board a charter flight to Toronto to begin training under a modified quarantine, isolated from the general public, or remain in Florida to conduct training,” the team said in a statement.

“The Blue Jays are hopeful to stage training camp and play regular-season home games in Toronto and will continue to work through this possibility."

A couple more teams had thought about resuming training at their facilities in Florida, but that possibility was dashed by a rise in coronavirus cases in the state. Most clubs intend to work out in their regular-season ballparks.

"All parties are committed to mitigating the risks of the spread of COVID-19 in Canada," she said in an email.

MLB requires an exemption from the restrictions that apply to the rest of Canada during the pandemic. Anyone entering Canada for nonessential reasons must self-isolate for 14 days, and the U.S.-Canada border remains closed to nonessential travel until at least July 21.

Dr. Andrew Morris, a professor of infectious diseases at the University of Toronto and the medical director of the Antimicrobial Stewardship Program at Sinai-University Health Network, said it would be a bad look for the governments to turn a blind eye to public health for the purpose of resuming professional sports just as Ontario is getting its COVID-19 numbers under control.

“This sets a pretty concerning precedent by allowing people from high-prevalence areas and waiving quarantine for them,” Morris said. “We’ve been pretty cautious about opening up our border. I guess now it’s essential purposes plus baseball.”

Morris noted the NBA will play within one confined area and the NHL within two, but baseball's plan to have all 30 teams traveling makes it hard to imagine there won’t be a spread of the virus.

Morris said Canadian health officials would lose credibility if they grant the exemption.

“These are decisions that are beyond public health. I really hope it doesn’t backfire,” he said.

A senior Canadian government official said last week that if MLB submitted an acceptable restart plan to the government, an exemption letter similar to the one provided to the NHL could be provided. The official spoke to The Associated Press on condition of anonymity because he was not authorized to speak publicly about the matter.

MLB announced last week it will have a 60-game regular season that will start July 23 or 24 in ballparks without fans.

Federal and local health authorities in Canada have approved a plan for the NHL to play in either Toronto or Edmonton, Alberta, but the plan does not involve travel back and forth between the U.S. and Canada. That decision last week comes as the NHL enters the advanced stages of selecting its hub cities — most likely two — from an original list of seven in the U.S. and three in Canada. Vancouver, British Columbia has been dropped from consideration.