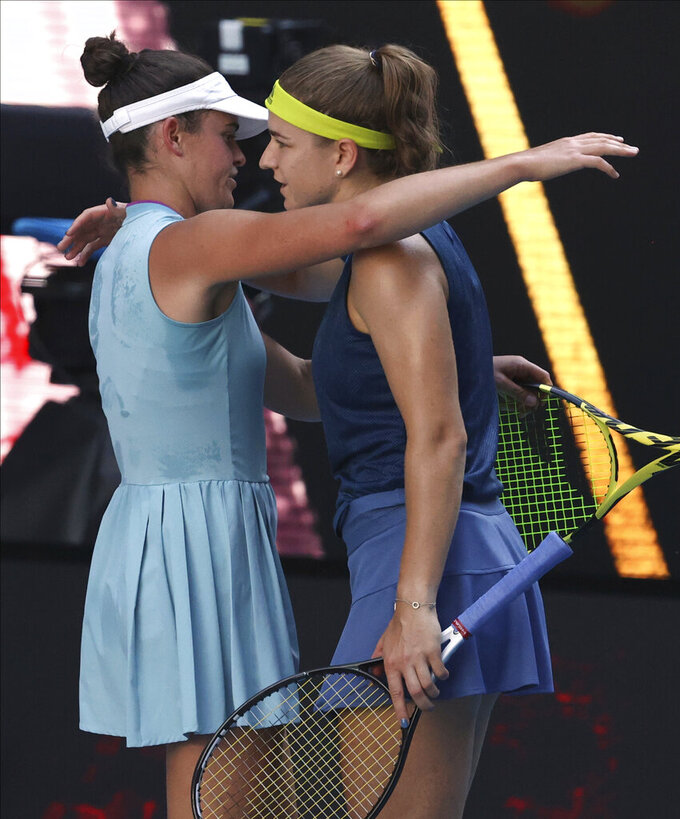 MELBOURNE, Australia (AP) — After the unusual path Jennifer Brady followed — college tennis at UCLA; just one tour-level title so far; more recently, a two-week hard quarantine upon arrival in Australia — perhaps it was fitting she took a circuitous route to her first Grand Slam final.

Serving for the win against Karolina Muchova in the Australian Open semifinals, Brady needed to get through an 18-point game to close things out. Six deuces. Three break points. Five match points.

“It took a lot longer than I hoped for. There were a lot of extra points,” the 22nd-seeded Brady said. “I was just so nervous. Couldn’t feel my legs. My arms were shaking. I was just hoping she would miss.”

Eventually, the 25-year-old American pulled it out, dropping onto her back behind the baseline when the 6-4, 3-6, 6-4 result was settled in her favor Thursday thanks to a long forehand from the 25th-seeded Muchova.

“I didn’t take chances I had,” said Muchova, who eliminated No. 1 Ash Barty in the quarterfinals. “She took hers. Yeah, that was about it.”

Brady, who is from Pennsylvania, had previously appeared in only one major semifinal, at last year’s U.S. Open, where she lost to eventual champion Naomi Osaka in three sets.

So guess who Brady will face Saturday for the title? Yes, the No. 3-seeded Osaka, who is seeking her fourth major trophy.

“Easily one of my most memorable matches. I think it was just super-high quality throughout,” Osaka said about that 2020 meeting in New York. “For me, it’s not really surprising at all to see her in another semis or another finals.”

For Brady, it was a bit unexpected.

Not that she discounted her chances: Seeing how she was able to hang with elite players in matches and practice sessions made her realize this sort of thing was possible.

“I mean, I wouldn’t say I’m in disbelief. ... I have earned the right to be sitting here, to be playing in a final," Brady said. "I just think it’s crazy to believe. ... Watching a Grand Slam final, you look at two players and you’re, like, ‘Wow, that’s awesome that they’re in the final.' You don’t think about what it feels like if you were in that situation. So I think just that it’s the tables have turned and I’m here.”

That might not have seemed too realistic in January.

Brady was one of 72 players entered in the Australian Open who were forced to isolate in their hotel rooms for at least 14 days — not allowed to leave, for any reason at all — because someone on chartered flights bringing them to the country last month tested positive for COVID-19 after they landed.

Actually, Brady thinks that could have been a help, because it forced her to “reset mentally,” she explained, and rest her body and mind.

She opted not to binge-watch TV shows while cooped up at the hotel, she explained, “because I knew if I started something, then I wouldn’t want to do anything else except just lay in bed and watch Netflix.”

How relatable is that?

Instead, Brady said, she passed the days by “FaceTiming a lot with other players that were in the quarantine.”

“It was more just trying to stay positive,” Brady said, “and know that there is worse things out there than being in a room.”

And worse things than being a Grand Slam finalist.