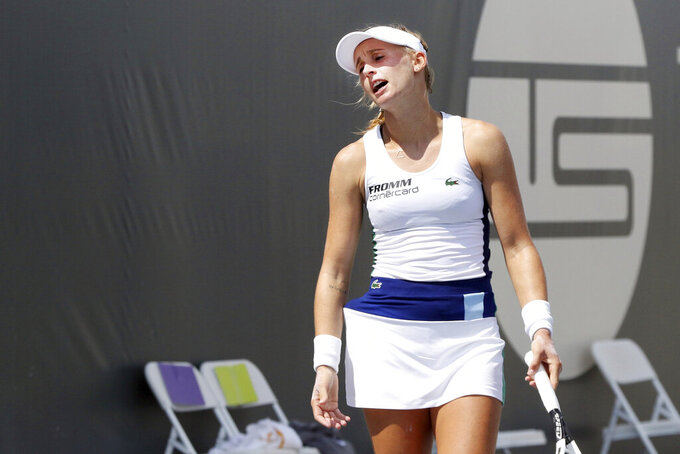 LEXINGTON, Ky. (AP) — Wearing a pandemic-appropriate mask, Jennifer Brady walked over to accept the first WTA trophy of her career, making sure to apply hand sanitizer before raising the new hardware overhead.

Brady claimed her initial tour-level title at the Top Seed Open on Sunday, overcoming some shaky serving and using a five-game run to seize control for a 6-3, 6-4 victory over Jil Teichmann in the final.

It was the the first professional tennis event in the United States since the start of the coronavirus outbreak, and no spectators were allowed.

The unusual circumstances did not bother Brady at all.

She did not drop a set throughout the hard-court tournament and ceded only 24 games in all. It was a perfect way to prepare for the U.S. Open, which begins Aug. 31 in New York.

And now Brady, who began the season needing to qualify to get into WTA events, is in line to be seeded for the U.S. Open.

“Definitely would not have expected that if you told me that earlier this year — or that I would win a WTA title,” said Brady, who was appearing in her first final.

Against Teichmann, a 23-year-old left-hander from Switzerland with two previous titles on clay, Brady put only 33% of first serves in play during the first set.

After one double-fault, Brady slapped her left thigh with her palm three times. After another, she exclaimed: “I’ve never missed this many first serves! I don’t get it!”

But at 3-all in the first set, she saved four break points, then earned the first break of the match in the next game to lead 5-3 when the 63rd-ranked Teichmann shanked a forehand.

That was part of a stretch where Brady punished any mid-court ball from Teichmann with powerful groundstrokes and went up by a set and 2-0 in the second.

“Maybe I wasn't using my legs enough ... or the toss was coming a little bit to the left. It could have been nerves. A little bit of everything,” said Brady, who eliminated 16-year-old Coco Gauff in the semifinals. “I put a little bit more expectations on myself to perform well, so I was getting a little bit frustrated. And that obviously wasn't helping. But I was able to reel it in and come back to reality.”

And she owns a trophy to prove it.