Jets' Bell insists he and Gase get along despite perceptions 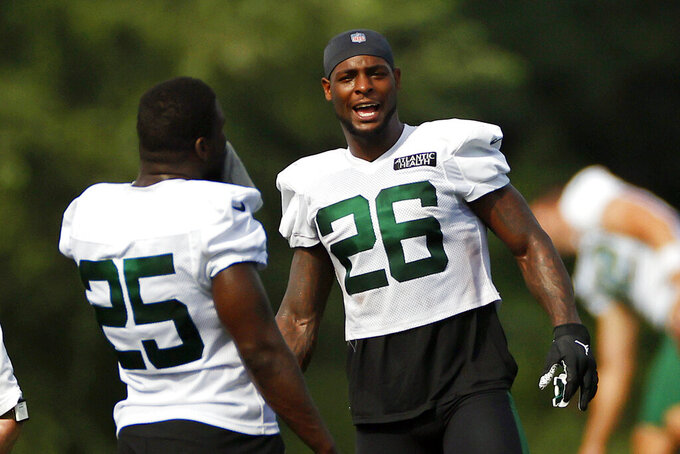 FLORHAM PARK, N.J. (AP) — Le'Veon Bell isn't quite sure what all the fuss was about.

The New York Jets running back took to Twitter last week to clarify the health of his hamstrings. And, yes, it came just minutes after Adam Gase's video conference call with reporters, which raised some concerns — again — about their player/coach relationship.

But as far as Bell's concerned, there's nothing to see here.

During the team’s scrimmage last week, Bell got limited work as 37-year-old veteran Frank Gore and rookie La’Mical Perine got the bulk of the snaps — while he mostly stood on the sideline watching.

Gase said Bell had “tightness” in his hamstrings. But, Bell wrote on Twitter, that “ain’t nothin wrong with my hamstrings.” Gase later said he was “caught off guard a little bit” by the running back's rant.

Bell clarified Thursday that he did, in fact, have some tightness in his legs because of the slower tempo of the scrimmage, but added he felt well enough to continue practicing. He and Gase chatted about the situation, and the coach said things were fine between the two. Bell also acknowledged it was the team's athletic trainers who wanted to be cautious with him.

“It was no big deal,” Bell insisted. “It was just a miscommunication for me, the trainers and coach Gase. But I just want to really clear it up for everybody — fantasy owners and everybody: My hamstring is fine.”

Bell is saying the right things now, but there have been instances that have suggested there might be at least some friction between him and Gase.

There were reports Gase didn't want to sign Bell — or any other running back, for that matter — to the type of deal the Jets gave the former Steelers star. The running back, signed to a $52.5 million contract over four years, spoke at times last season about his usage in some games, pointing out that he has been most successful in his career when he touches the football more.

Gase has acknowledged he needs to use Bell more efficiently, and also increase his role in the passing game to utilize the Jets' most accomplished offensive weapon. But the addition of Gore has some wondering if that will cut into Bell's snaps.

“Ever since I got here and he got here, there’s kind of been this little thing of me and him butting heads all the time, which I don’t know where it comes from,” Bell said. “We had a long conversation because basically people blew it out of proportion because I did make the tweet.”

Bell said he would, moving forward, speak to Gase directly about how he's feeling physically rather than going through "two, three, four middle men.”

As far as using social media to air his grievances before speaking to Gase, Bell didn't necessarily think he made a mistake.

"I’m just telling you, my hamstrings are fine.”

NOTES: Rookie OT Mekhi Becton made the first big purchase of his pro career: a massive chain and diamond-filled pendant in the shape of a ticket and his nickname in the middle, Big Ticket. A picture of the 6-foot-7, 370-pound lineman wearing his chain made the rounds and TMZ Sports reported it was worth $400,000. Not quite said Becton, who clarified that it cost “only” $175,000. ... S Marcus Maye (calf), WR Breshad Perriman (knee), LG Alex Lewis (shoulder), LB Tarell Basham (ankle), RB La'Mical Perine (ankle), OL Cameron Clark (knee), WR Jeff Smith (shoulder), DL Jabari Zuniga (quadriceps) and OL Chuma Edoga (non-COVID-19 illness) all sat out of practice. ... S Bradley McDougald was excused for personal reasons. ... Rookie RB Pete Guerriero was released just two days after being re-signed by the Jets. The former Monmouth star originally signed earlier this month.