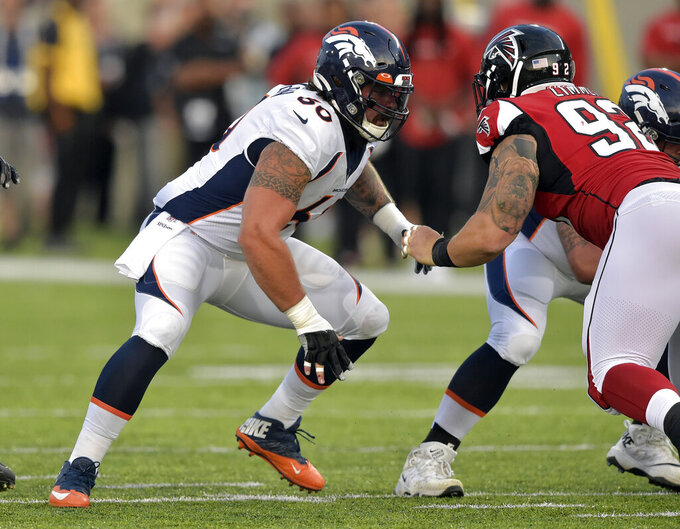 The big, Midwest-bred New York Jets offensive lineman spent his childhood playing on the ballfields of Fargo, North Dakota, and helping out on the potato-filled farms owned by his family.

“The family business isn't your typical, you know, what people probably in the city picture as a farm with the red silos and all that kind of stuff,” McGovern said Friday during a conference call. “But, it obviously taught me a lot about hard work and how to handle ups and downs.”

Today, R.D. Offutt Farms produces more than 50,000 acres of potatoes every year, according to the company's website, and it's still all in the family. McGovern's father Keith is the company's president and his aunt Christi is the chair - with Ron serving as the chairman emeritus.

The 6-foot-4, 305-pound burly McGovern certainly looks like he knows his way around a farm. He also knows plenty about it.

“There are years where potato farming goes pretty smoothly and you don't have a lot of diseases and the weather cooperates and all that,” he said. “Surprisingly, potatoes are, I would say, pretty ornery vegetables."

No kidding? Who knew?

“They're very susceptible to diseases and there's a lot of stuff that goes on during farming season that you have to deal with and handle all that kind of adversity,” McGovern said. "So, it helped a lot with, really, the learning aspect of hard work and how to handle adversity."

McGovern, who turns 27 later this month, was a two-way star at Shanley High School and the Gatorade Player of the Year for North Dakota as a senior. He redshirted as a freshman at Missouri, worked his way onto the Tigers' starting offensive line at guard, right tackle and finally, left tackle.

Denver selected him in the fifth round in 2016. McGovern didn't play as a rookie, then filled in as the starting right guard for the last five games the next year. He switched to center midway through 2018 when Matt Paradis was hurt and remained there last year.

After signing a three-year contract worth $27 million with the Jets as a free agent, he's expected to be a key to New York's revamped offensive line — either at center or guard.

“Personally, I think I could be most successful and help the team the best way at center,” McGovern said. “Whatever helps us win the most games. I think my physical attributes fit best with center, but I also think I could be a pretty dang good guard.”

Jets general manager Joe Douglas made protecting Sam Darnold the priority this offseason. He's in the process of improving the collection of big boys in front of the franchise quarterback.

“I think he’s going to keep growing into something special,” said McGovern, who has texted with Darnold; the two are represented by the same agency. “I’m excited to build a pretty serious relationship with him and be able to help him with anything I can on the field.”

The players are hindered by restrictions in place because of the coronavirus pandemic. Lewis said during a conference call that the offensive linemen might soon have video chats as well as physical challenges to help stay in shape, learn the system and build rapport.

McGovern believes they'll gain that cohesion and be a strength of the team. He certainly doesn't lack confidence. For himself, or for the future of his new team.

“They're a team that I thought has an opportunity to win a lot of football games,” he said. “They're really starting to build something special. ... I'm here to win championships. All the personal accolades and all that kind of stuff comes with that.

"But definitely the most important thing and the reason I'm with the Jets is I think they've got the coaches and the players to win a Super Bowl.”

Yep, McGovern has his sights set on going from raising potatoes to raising the Lombardi Trophy.