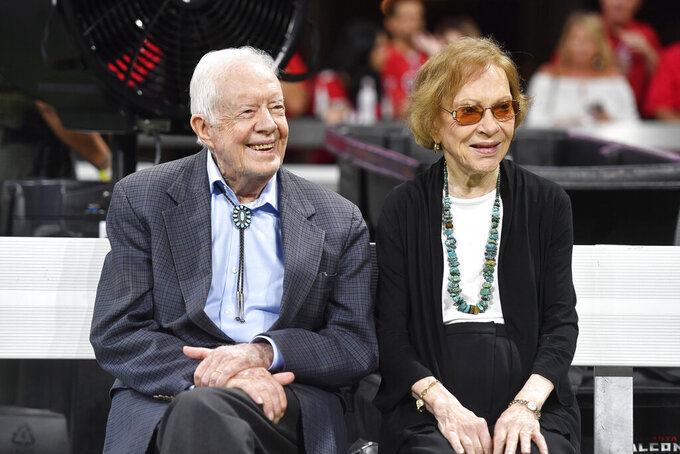 FILE- In this Sept. 30, 2018 file photo, former President Jimmy Carter and Rosalynn Carter are seen ahead of an NFL football game between the Atlanta Falcons and the Cincinnati Bengals, in Atlanta. Former President Jimmy Carter and former first lady Rosalynn Carter will not attend President-elect Joe Biden’s inauguration. It marks the first time the couple, 96 and 93, will have missed the ceremonies since Carter was sworn-in as the 39th president in 1977.(AP Photo/John Amis, File)

ATLANTA (AP) — Former President Jimmy Carter and former first lady Rosalynn Carter will not attend President-elect Joe Biden’s inauguration. It marks the first time the couple, 96 and 93, will have missed the ceremonies since Carter was sworn in as the 39th president in 1977.

A spokeswoman at The Carter Center in Atlanta said the Carters have sent Biden and Vice President-elect Kamala Harris their “best wishes” and “look forward to a successful administration.”

Biden was a young Delaware senator and Carter ally during the Georgian’s term in the White House.

The Carters have spent the coronavirus pandemic mostly at their home in Plains, Georgia, where both were raised and where they returned after leaving the White House in 1981.

Separately, former President George W. Bush and his wife Laura will attend the inauguration in person. Their spokesman, Freddy Ford, said, “President and Mrs. Bush look forward to returning to the Capitol for the swearing in of President Biden and Vice President Harris.”

The announcement from Bush, a Republican, came a day before Congress was scheduled to convene for a joint session to confirm the Electoral College vote won by Biden. President Donald Trump's Republican allies in the House and Senate plan to object to the election results, a longshot effort that is all but certain to fail.

The Bushes also attended Trump’s 2017 inauguration. Ford added that “witnessing the peaceful transfer of power is a hallmark of our democracy that never gets old.”

Carter, a Democrat, became the longest-lived American president in March 2019, surpassing former President George H.W. Bush, who died the previous November. Carter survived a melanoma diagnosis that spread to his brain in 2015. He has since had several falls and hip replacement surgery. He no longer teaches Sunday School at Maranatha Baptist Church in Plains, as he had for decades, but still participates in church activities via video amid the COVID-19 pandemic.

Carter was the first former president to confirm his plans to attend Trump’s inauguration in 2017. The Carters were seated on the aisle, next to former President Bill Clinton and Hillary Clinton, and former President George W. Bush and Laura Bush. The elder Bush was the lone former president at the time who did not attend Trump’s inauguration. The Carters did travel to Washington for the elder Bush’s funeral.