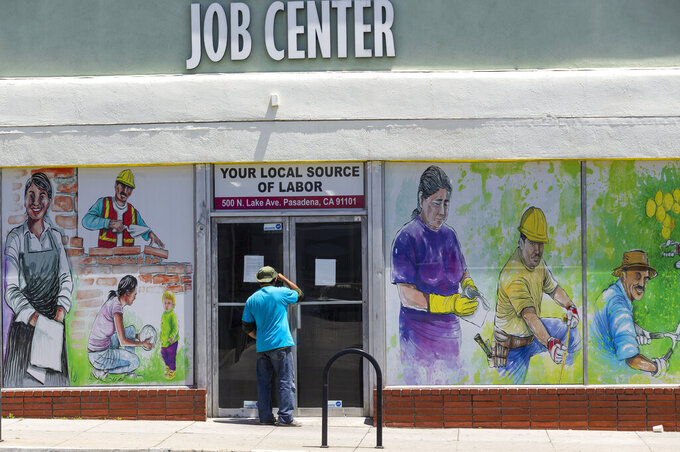 A worker looks inside the closed doors of the Pasadena Community Job Center in Pasadena, Calif., Thursday, May 7, 2020, during the coronavirus outbreak. The center normally connects members of the community, residential customers and small business owners with skilled day laborers. (AP Photo/Damian Dovarganes)

BALTIMORE (AP) — As the coronavirus rampaged across the U.S. economy, it slashed a cruel path of job losses, reduced hours and hardships for America's most vulnerable workers.

The 20.5 million jobs lost in April fell disproportionately on African Americans, Latinos, low-wage workers and people with no college education. Friday’s jobs report from the government — the worst on record — exposed the deep seams of inequality within the world’s wealthiest nation and the threat they pose to an eventual economic recovery.

The paradox is that if the economy is to fully bounce back, those same workers will need to be restored to jobs at restaurants, hotels, offices, factories, warehouses, medical facilities and construction sites. The flow of commerce hinges on their ability to deliver packages, cook meals, run clinics, provide public transportation and clean and maintain buildings. And their income, though typically low, supports the consumer spending that fuels most U.S. economic activity.

“This represents a huge loss for the productive capacity of the economy,” said Stephanie Aaronson, director of economic studies at the Brookings Institution. “The economy is smaller and grows much less quickly when these workers are isolated from employment.”

African Americans are more likely to die from the virus. Latinos and non-college graduates are heavily concentrated in low-wage occupations, including jobs that have helped keep the nation fed and safe during the pandemic. Those groups were also among the first to lose their jobs as the economy crashed at a speed unrivaled in modern American history.

By contrast, the unemployment rate for white Americans was 14.2%. And just 8.4% of college graduates — who often enjoy the flexibility to work from home — were unemployed.

Latinos likely suffered disproportionately from the layoffs because they are more likely to work in the leisure and hospitality sectors — at hotels, restaurants and bars — where job cuts have been especially brutal, noted Gbenga Ajilore, an economist at the Center for American Progress, a liberal think tank.

“This shows that when the economy recovers, we have to be intentional about tackling the structural barriers that limit the employment outcomes of these groups,” Ajilore said.

The vast magnitude of the layoffs has laid bare the inequalities that endured long before the viral outbreak.

President Donald Trump frequently highlighted the job gains achieved by minorities during his first three years in office, pointing to them as evidence that his administration was bridging the nation's wealth gap. But the pandemic has shown that the 11-year expansion did not provide much financial cushion to these workers, many of whom are now struggling to buy food and pay their housing bills.

Among them is Erika Romero, a native of El Salvador who abruptly lost her job last month as a janitor at the Postal Square Building in Washington. Romero was left without health insurance or the ability to pay most of the monthly mortgage on the Maryland home she shares with her husband, their two daughters, her adult son and both sets of grandparents.

Her husband had his daytime job reduced to three days a week, and his overnight cleaning job was cut. She has received one unemployment check so far, not nearly enough to support her substantial family.

“Where am I going to look for work in this epidemic?” said Romero, who lives in the United States on a temporary protected status after an earthquake struck El Salvador. “It’s just unfair.”

More than 100 members of Romero’s union have died of the coronavirus, and 20,000 others have lost jobs, according to the local Service Employees International Union, which represents 175,000 janitors, security guards, doormen and other property service workers. Many lack legal status in the United States, said Jaime Contreras, vice president of the local union.

“Those workers can’t apply for unemployment,” he said. “They don’t get the stimulus money. They are left in the dark. To me, that is a huge mistake because this pandemic knows no legal status.”

Seven of the country’s top cleaning companies are pushing Congress for payroll protection in the form of grants and tax credits. They warn that it could take weeks or months to rebuild their workforce at the very time when demand for professional cleaning could surge as schools, stadiums, gyms and other public spaces re-open.

“The last thing we want to do is have to rebuild the skilled network back up just as we get more demand,” said Josh Feinberg, chief strategy officer for ABM Industries, a contract cleaning company.

Many minorities who work in the construction sector and restaurant industry, for example, have developed specialized skill sets. Last month, construction companies cut a stunning 975,000 workers, a record monthly loss.

Alex Tellez was working as a bartender and server at a Chicago steakhouse when he was told by a manager in mid-March to file for unemployment aid. Born in Mexico, Tellez had steadily moved up in the restaurant industry over 23 years, earning up to $60,000 year to support his wife and two daughters, ages 3 and 5. But now he has fallen several thousand dollars into credit card debt to support his immediate and extended family.

Tellez, 43, is considering a career change. He doesn’t see how the restaurant industry can survive a future with social distancing rules and precautions in place indefinitely.

“As a bartender, I can’t serve you unless you’re one or two feet away from me,” he said. “It breaks my heart that I might have to leave. I love being in the industry. It’s a passion of mine.”