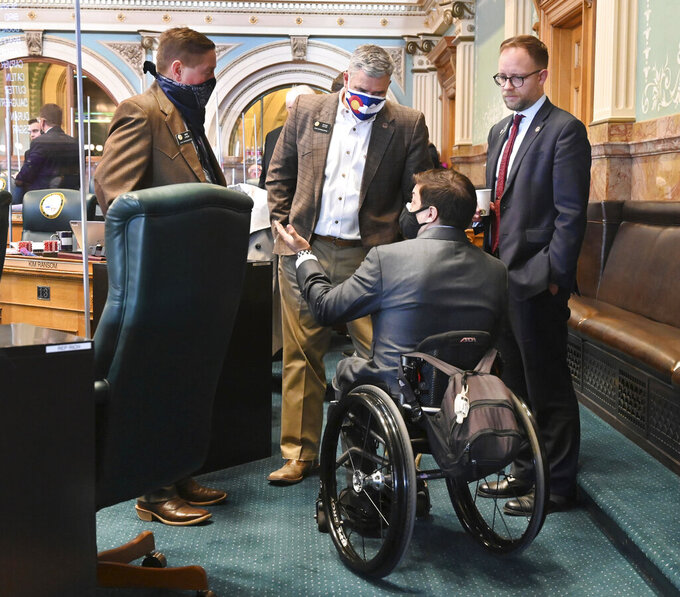 Freshman Representative David Ortiz, front center, D-Centennial, chats with Representatives Mike Lynch, from left, R-Wellington, Richard Holtorf, R-Akron, and Matt Soper, R-Delta, during a recess of a session of the Colorado State House of Representatives on Tuesday, Feb. 16, 2021, in Colorado Springs, Colo. Ortiz is the first person in a wheelchair to serve as a state lawmaker and is a veteran. (Jerilee Bennett/The Gazette via AP)

Following a month-long break due to COVID-19 safety concerns, majority Democrats and minority Republicans in both chambers pledged collaboration in confronting what Senate President Leroy Garcia termed “one of the most heartbreaking times in our history.”

Garcia cited the pandemic’s toll in the state — 5,000 deaths, thousands of people without jobs and closed schools — along with a climate crisis and systemic inequality as key challenges.

“We are charged with shepherding our communities through this crisis,” he declared.

Senate Republican minority leader Chris Holbert congratulated his colleagues for doing more for Colorado in a three-day COVID-19 relief special session last year than Congress has done since last spring. But he urged extreme caution amid expectations that Congress could potentially deliver billions of dollars in relief to Colorado under the Biden administration in a new stimulus package.

“Let’s wait until we actually have those dollars before we start spending them,” Holbert said, noting the Legislature is constitutionally obligated to balance the state budget.

The first priority, he said, is restoring services reduced drastically last year, when lawmakers had to cut $3 billion from an $11 billion discretionary spending fund. Schools took the biggest hit — on top of billions of dollars that were constitutionally owed but not allocated to education by the state, a shortfall that's accumulated for years.

Republicans, outnumbered 20-15 in the Senate, want a serious discussion about the Legislature’s role in future extended disaster emergencies, Holbert said, citing the 300-plus executive orders and extensions of those orders issued by Democratic Gov. Jared Polis under the pandemic emergency.

In the House, where Democrats hold a 41-24 advantage, Speaker Alec Garnett and Minority Leader Hugh McKean pledged similar collaboration. Garnett emphasized the need for policy that would bring more equity following the economic downturns of the pandemic.

“The economic scramble created by this devastating pandemic has given us a once in a generation opportunity to forge a just and inclusive economy where every Coloradan has a fair shot," Garnett said.

Following the George Floyd protests last summer, the Legislature passed a police accountability bill with broad bipartisan support. On Tuesday, Garnett asked the House to continue its work toward racial justice. “I’m proud to say Black Lives Matter. But it has to be more than a slogan, it must be a policy priority,” he said.

McKean insisted the 2021 session should take into account vast differences between the urban and rural parts of the state, a frequent source of contention for Republicans who dominate in rural areas. “Treating the state with a set of solutions that work for Front Range Colorado is increasingly seen as a war on our rural areas,” he said.

Following the speeches, Democratic Rep. Donald Valdez asked the chamber to consider punishment or even expulsion of first-term GOP Rep. Ron Hanks, who has said he was in Washington during the Capitol insurrection on Jan. 6 and has suggested, falsely, that the Antifa movement was to blame for the rioting. Garnett quickly interrupted Valdez, calling his remarks inappropriate.

Polis is set to present his annual state of the state address on Wednesday. The Democrat has proposed a $1 billion-plus economic stimulus plan to create jobs. The state's unemployment rate was 8.4% in January, with the restaurant and hospitality sectors particularly hard hit. By contrast, Colorado unemployment was 3.6% in January 2020, before the pandemic.